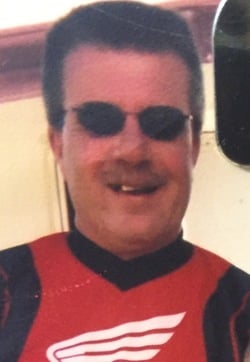 Dean T. Hadley, 56, of Lomira, passed away unexpectedly at his home on Tues., December 29, 2015. He was born in Fond du Lac on April 14, 1959, the son of Thomas and Sharon (Howard) Hadley. Dean served in the U.S. Navy from 1976 to 1980, serving aboard the aircraft carrier USS Constellation. He currently worked as a forklift operator at Helgesen Industries, Hartford. Dean enjoyed fishing and especially enjoyed dirt biking with his nephew, Dalton. He also enjoyed socializing with friends at local bars.

Survivors include his parents Tom & Sharon of Yuma, AZ, his sister Lori (Bill) Dei and nephew Dalton of Kewaskum,his brother Mark Hadley of Sheboygan, other relatives and friends.

Dean was preceded in death by his brother, Todd.

The family will plan a Memorial Service during summer, 2016.

Twohig Funeral Home, Campbellsport, is serving the family with online condolences and guestbook at www.twohigfunerals.com.