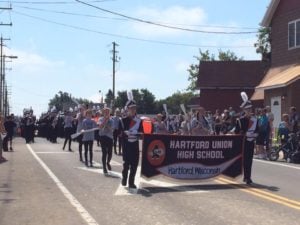 Students in the Hartford Union High School Band and Orchestra program are about to begin preparing for the opportunity of a lifetime. The group, directed by Mr. Andy Hacker, has been selected to perform in the 2017-18 New Year’s Day Celebration and Gala Concert Festival in London.

The celebration is iconic around the world when around 500,000 people line the streets for the parade and music festival each year. In order to formally accept the invitation to perform in the New Year’s Day festivities, the Lord Mayor of Westminster will come to Hartford Union High School on Sept. 19, 2016 at 7:15 a.m. to present a formal invitation to the group during an all-school assembly.
Westminster is home to both the elected Government (The Houses of Parliament) and the head of State (Buckingham Palace) of The United Kingdom. The Lord Mayor of The City of Westminster is the first citizen of the city and as such is also host to London’s New Year’s Day Parade and Festival, a principal patron of the event.
The Lord Mayor is appointed annually and serves for one year only. Some of those who have served as Lord Mayors are specially designated to continue to be Parade Patrons and to fulfill certain Lord Mayoral duties in connection with The Parade and Festival.
Each year in the autumn the Lord Mayoralty decides upon a select number of groups that it wishes to visit in the United States of America in connection with London’s New Year’s Day Parade and Festival. Making the visits on behalf of The Lord Mayoralty this year is Robert Davis has long served as a Patron and International Goodwill Ambassador to London’s New Year’s Day Parade. Robert was Lord Mayor of Westminster 1996/7 and has been a Westminster City Councillor since 1982. He is currently Deputy Leader of the Council having previously served as Chief Whip for eight years.
He sits in the Council’s Cabinet as Cabinet Member for the Built Environment, a role which includes Planning, Special Events, The Public Realm and the Lord Mayoralty. Cllr. Davis is Chairman of the Board of Trustees of the Open Air Theatre, Regents Park and is a Trustee of the Savoy Educational Trust and Mousetrap Theatre Projects as well as Vice President of the Heritage of London Trust and President of the Westminster Guide Lecturers Association.
Educated at Cambridge University, Cllr. Davis has just retired as a lawyer and is now a full time politician. He is a Freeman of the Company of Watermen and Lightermen, a Member of The Guild of Freeman of The City of London, a Liveryman of The Worshipful Company of Fan Makers and a Chevalier of ‘L’Ordre de la Channe’.

He is also Chairman of the London Mayors’ Association which represents the Mayors and former Mayors of all the 33 London Boroughs. He has been appointed by Her Majesty The Queen as one of her Deputy Lieutenants of Greater London with the right to use the letters “DL” after his name. In the Queen’s Birthday Honours List published in June 2015 he was made a Member of the Order of the British Empire and may use the letters MBE after his name.
Cllr. Davis will be accompanied on this year’s visits by London Parade and Festival Founders and Directors Robert and Geraldine Bone, and Jonathan Whaley, the event’s Director of International Participation.
Hartford Union High School Band and Orchestra students are extremely honored to participate in this parade and festival. The students and chaperones will be working hard to fundraise the costs to make this opportunity of a lifetime a reality.