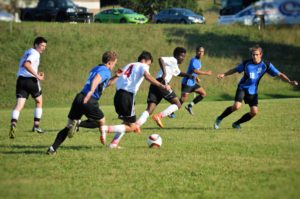 The UW-WC Wildcats faced conference rival UW Fond du Lac on Wednesday and the match ended in a 2-2 draw. The Wildcats were able to overcome a 1-0 deficit at halftime, scoring twice in the second half.

The first goal was scored by Abijah Allsop of a cross sent in by Alex Knueppel.

The second goal was an own goal by the Fond du Lac defense off a ball played in by Jack Blaski.

Late in the second half, Fond du Lac managed to tie it up.

Two 10-minute overtime periods were unable to produce a winner.

Josh Marks had 13 saves in goal.  UW-WC’s next match is Saturday, Sept. 17 at UW Marathon.