May 8, 2019 – West Bend, WI – Later today the City of West Bend will present Doris Romaine Yach with a proclamation announcing May 9 will be dedicated as Doris Yach Day. The honor is being bestowed as a tribute to Yach’s 100th birthday.

Doris’s son Richard Yach submitted the story below following a video interview with his mom. 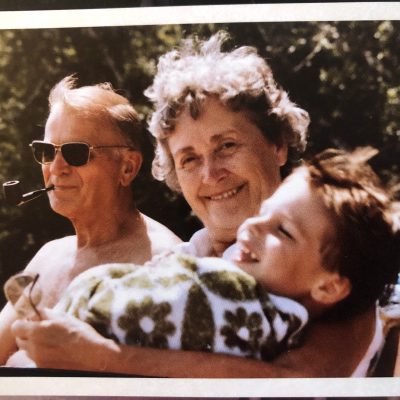 I was born on the farm and went to a one- room country schoolhouse. For three years until we moved into Campbellsport which at the time had a population of 600 people. I graduated from high school and went to college and became a business teacher and worked in offices from the time I was 14 fourteen years old. I taught shorthand. Accounting, typing. I was fortunate enough to go back to teaching and continue until I was 65.

During the depression my dad had a job. We left the farm in 1927 when I was 9 and moved to Campbellsport and my dad Edgar Romaine had a job delivering gasoline to the farmers. Which was fortunate. I can remember my mother making a meal on a dollar for the five of us. I babysat for my neighbor for .25 for the whole night. I took care of a nine-month-old baby for a whole day while his parents went to a football game in Madison for a dollar. I was 14 years old then. 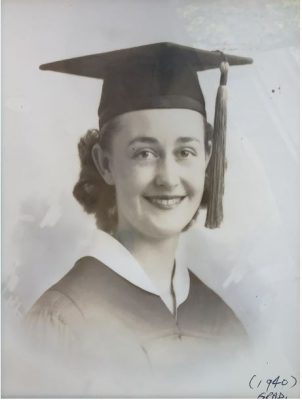 I started first grade when I was five. I was always one year younger than everyone in my class because most children started when they were six. Our teacher lived with us on the farm out in New Prospect so I could go to school with her when I was five.

I was 14 and worked in the bank in Campbellsport. Mostly back-room work, but I always had a job.

What were you doing when Pearl Harbor?

I was in my room December 7 preparing to teach my classes at East High School. Right before that a friend of mine from Aurora, Leo Smith went into Navy Service and I am sure he was at Pearl Harbor and was killed during the attack. I remember the days following. 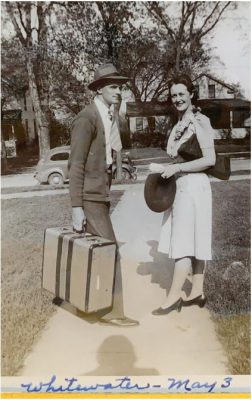 Your grandpa Harry’s first car was a 1936 grey Chevy which he sold before he went overseas during WWII.

When he came back. He had a different car every year. 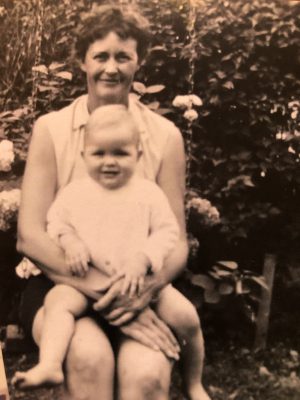 I was pregnant with my first child when my husband Harry went overseas. I went back Campbellsport and was a substitute teacher. I took over directing the senior class play. I also taught the first 4 grades, first through 4th. The county school superintendent came up to me and said “If you can teach high school, and then can bring yourself down to teach first grade, you have a job.”

I substituted until my first child (Robert) was born and then Harry came home.

Harry went to England in February 1944 and was based in Cardiff, Wales. His staff was responsible for sinking of enemy ships in the channel prior to the invasion of the continent. I have pictures of Yankee Stadium in my photo album. When we were in New York after Harry (Yach) mustered out, we stayed in New York for a few months and went to the Yankees games. 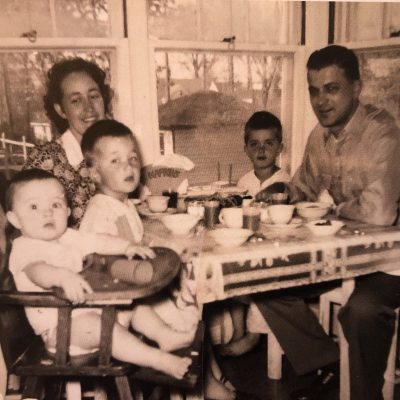 Taking care of six children. I had to be organized. Monday it was grocery shopping. Tuesday wash, mending, cleaning was another full day.

After teaching three years and then getting married after the war, I took care of the children. Back then there weren’t any married teachers. It was socially unacceptable. You were supposed to become a full-time mother and housewife.

Going back to work. Their need for teachers. Paper was full of jobs for part-time substitutes.

In Wauwatosa where we lived, the business department head was a friend of mine. He knew my record in college. I was an Honor Roll Student in college. He said, “By all means Doris, please go sign up.” I took some refresher credits and then took a job in an office part time because I couldn’t teach office skills without knowing what skills were needed in the workplace. I taught from my 50’s until I was 65. I took on teaching adults afterwards and found it rewarding and challenging. They wanted a job upgrade in the office. I taught all levels of shorthand. 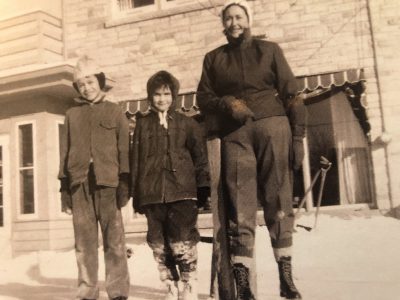 Everything I did was for family. There wasn’t a me. My children will say you were always there. I look back and I wish I could change somethings. I would like to have had more time to sit down and read with the kids, play games with the kids. But housework and the necessity of organizing the house came first. They talk about things they did, and I don’t remember. I was too busy.

I don’t watch sitcoms or the soaps. I watch the news now and the weather and the ballgame. I am a big UW basketball fan. I grew up in a small high school in Campbellsport where there wasn’t any football. The only high school sports were baseball and basketball. I was a cheerleader for the basketball team. 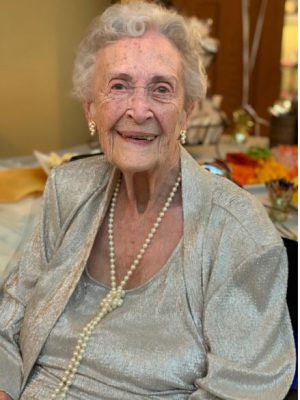 I lived in a world without computers and I don’t know what your world is like today but it is certainly different.

(Editor’s Note: Not totally true. She has an I-pad courtesy of Carole Ostrowski.)

Advice: To future generations: You (my great grandchildren ) are all going to college but don’t plan on something specific. It may change.

Find something you’ll like doing and work hard at it.