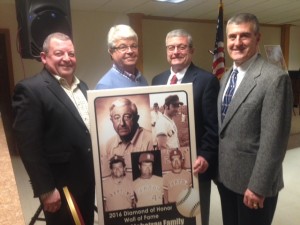 The Liebetrau family, Bob, Roger, Don, and Jerry, were inducted over the weekend into the West Bend Baseball Association’s Diamond of Honor-Wall of Fame. The family has an extremely strong history on the local baseball scene.

Chuck Liebetrau was a volunteer umpire in the local Little League when his family moved to West Bend in the 1960s. He followed his four boys’ sports careers and was a familiar sight in the stands at Regner Park.

Jerry played  for the Barton team in the Land O’Lakes league for over 20 years; he was a manager/player and also coached the West Bend Little League.

Roger, a phy-ed teacher in the West Bend School District for 25 years, played baseball in college and coached the West Bend Little League and Senior League programs and was a WIAA umpire for over 30 years.

Don won the 1974 Carl Pick Memorial Athletic Award in high school, went onto play ball in college and then returned home to play on the Barton team in the Land O’ Lakes.

Bob played in the West Bend Little League and Senior League, won the Carl Pick memorial Athletic Award in 1979 and went onto play and coach with his brothers in the Land O’ Lakes league. “One person I’d like to recognize is our sister Darlene,” said Bob. “We were pretty young when our mother died and Darlene was 16 and she’s the forgotten Liebetrau but she’s the hero.”

Bob talked about how Darlene took care of the home and washed their uniforms. “When most girls her age were thinking about getting their driver’s license, she was taking care of us,” he said.

The Liebetrau family was credited with “leadership and the ability and willingness to share that knowledge with players and coaches.”