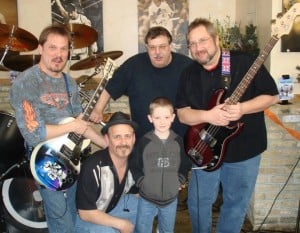 There’s a reunion Saturday, Jan. 23 as a popular local rock band gets together for one more performance.
The band Jack Damage split amicably in 2013 when the guitarist moved way up north to marry his sweetheart and start his own business. “It was hard to step away from a band that was growing in popularity and had so many devoted fans and friends,” bassist Kevin Polster said.
Jack Damage will reunite to put on a show for the many loyal followers who have stayed in touch via social media and have supported and encouraged the band then and now.
The show will start at 8 p.m. at Stocky’s Fast Track Bar and Grill, 6389 Stockhausen Lane, in West Bend. “Stocky’s is ideal for this show,” said Polster. “It’s big enough, has great food, and a nice family atmosphere.”
Jack Damage features songs from some of classic rock’s biggest acts like Cream, SRV, Jimi Hendrix and ZZ Top. An open jam session will follow and musicians of all genres are welcome to perform.
Please see Jack Damage’s Facebook page for further details.