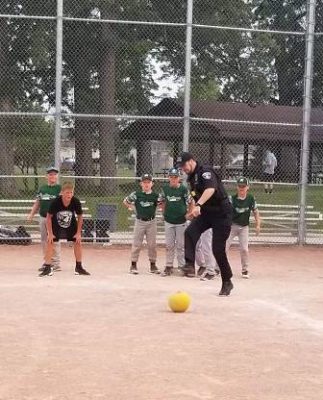 July 11, 2019 – Kewaskum, WI – Earlier this week it appears Kewaskum Police Department (KPD) Officer Steven Rosales was spotted playing a game of kickball with some great local kids. In full uniform, Rosales took a moment to engage the youth in a positive manner.

According to Chief Tom Bishop via the KPD Facebook page, “Officer Rosales stopped and played kickball at the park a few days ago with some kids who were there. At the Kewaskum Police Department, we encourage our officers to get involved in our community and build positive relationships such as Officer Rosales did here.”

Rosales was sworn in to the Kewaskum Police Department on June 5, 2017.