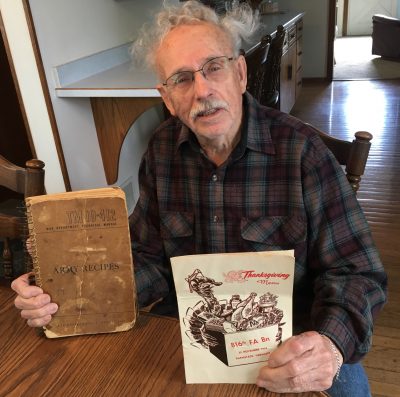 May 15, 2017 – West Bend, WI – As he sat at his kitchen table, Robert Schotzko of West Bend thumbed through the yellowed and well-worn War Department Technical Manual TM10-412, a leftover from WWII, but useful even today. It is one of Robert’s prized possessions and one that he used frequently when serving during the Korean War. He was an Army cook in Darmstadt, Germany, and this was his Army Recipes cookbook.

Robert is now 85 and is one of the veterans participating in the upcoming May 21 Stars & Stripes Honor Flight to Washington DC. Originally from Eau Claire, Wisconsin, he joined the Army right after high school, inspired because of the loss of his best friend who served in the US Army on Korean soil. He began Basic Training at Fort Chaffee in Arkansas and was transferred to Darmstadt, Germany with the 816th FA Battalion for further training. 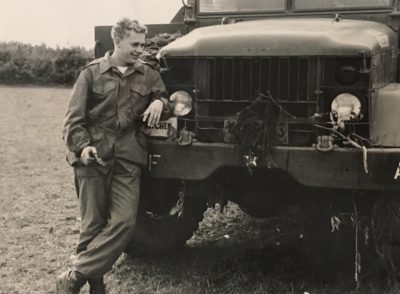 “Shortly after my arrival in Germany,” he tells the story, “I was riding in a half-track and a jeep pulled up alongside.” “Can anybody in here cook?” came the shout from the jeep.” Robert paused for a moment in the telling with a twinkle in his eye. “I didn’t hesitate for a moment,” he said. “I just answered, ‘I can!’” 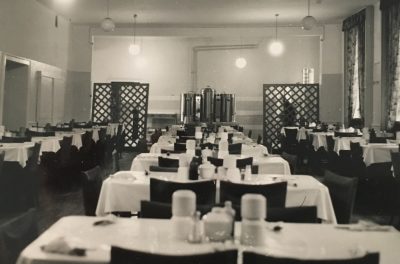 “We served meals in two shifts of more than 100 personnel at each sitting and had to make sure there were enough leftovers for anyone who came late.

There were five cooks on duty at all times and they rotated through the kitchen at various stations; one day I would prepare all the meats, another day I would work on vegetables or desserts.

We took turns. I can still remember the first time a General came through the line – he was first in line – but he ate the same regular breakfast as everyone else.” 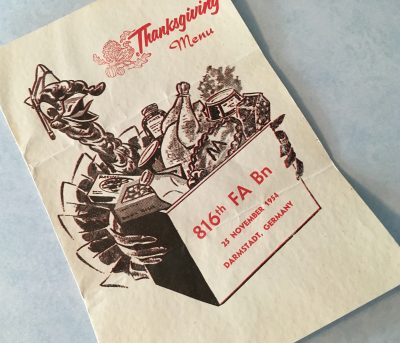 Holiday meals were a bit more special. Tablecloths would adorn the tables and a special menu would be prepared.

Cooking in the field was different than cooking at the base and could be intense if supplies were low.

Robert remembered a certain mashed potato incident where kitchen magic, which will remain a secret, saved the day.

He remained in Darmstadt as a cook for the extent of his service, but was able to travel a bit in Germany and Holland and France. He found the rebuilding of Darmstadt, which was flattened by English bombs during WWII, fascinating. “I paid close attention to the placement of cobblestones and learned a bit about masonry as I watched them rebuild the city,” he said.

After his tour of duty, Robert returned to Eau Claire to help his father on the farm. He married Marie and moved to the Milwaukee area to work at American Motors. One day he saw a pamphlet that mentioned West Bend and he was intrigued. He and his wife decided to move here and they raised seven children together in West Bend. He found work at Simplicity in Port Washington and worked there until his retirement.

Robert is excited to have the opportunity to look around Washington DC, where he has never been before. His son Skip, of Eau Claire will be his guardian. His daughter Jane, of West Bend, is also going as the guardian of one of Robert’s closest friends.