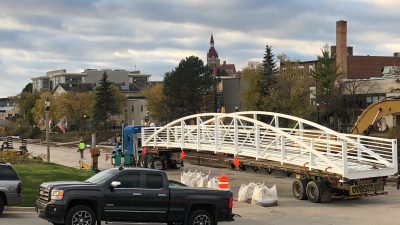 Oct. 24, 2018 – West Bend, WI – The second white bridge has arrived in downtown West Bend and is being put in place over the Milwaukee River.

This bridge is being installed to the south of where the ‘bridge to nowhere’ used to be located.

This bridge replaces the metal bridge that used to be fondly known as “Kevin’s Bridge” for Kevin Schultz from Mountain Outfitters.

The 20,000-pound bridge arrived Wednesday morning around 8:15 a.m.  Bernard was the driver of the oversize load. He said he started Tuesday in Minnesota and made it to Waupun where he spent the night at the truck stop.  Then he pushed along in the morning and came down Highway 33 to West Bend.  Below is a one-on-one interview with Bernard when he arrived on Veterans Avenue.

-There won’t be a lot of street parking on Veterans Avenue and contractors hope people can park on the east side of the road especially when 20-foot sheets of piling are being moved in. The traffic  will not affect the Museum of Wisconsin Art.
-The old bridge, also known as ‘Kevin’s Bridge’ had steel that’s rotted and only pedestrian traffic and dollies were allowed to cross at this time. That bridge is being replaced.
-Parking spots on the west side of Veterans Avenue are being removed just south of the driveway for the Museum of Wisconsin Art. Still waiting for confirmation on how many spots are being eliminated.
-Construction should be finished in late October/early November.