Home  »  Uncategorized   »   Look who is featured in today’s Aaron Rodgers 12 Days of Christmas? Nice write up on Bailey Dove of Jackson 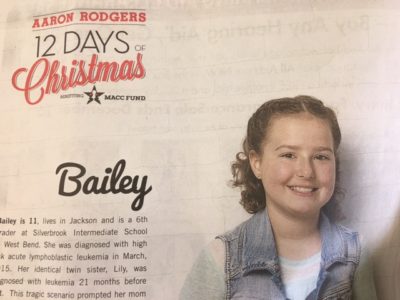 Aside from being featured on Aaron Rodgers 12 Day of Christmas Facebook page, there was also a full-page ad taken out in the Monday edition of the Milwaukee Journal Sentinel.

The ad said Bailey was a 6th grader at Silverbrook Intermediate School in West Bend. 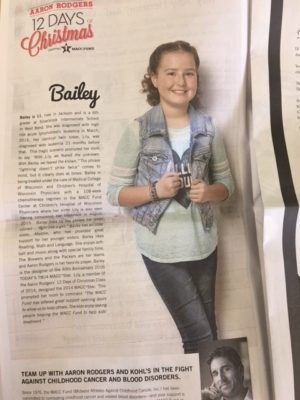 She was diagnosed with high risk acute lymphoblastic leukemia in Mach, 2015.

Her identical twin sister, Lily, was diagnosed with leukemia 21 months before that.

The phrase “lightning doesn’t strike twice” comes to mind, but it clearly does at times.

Bailey lives by the phrase her sister coined – “fight like a girl.” Bailey has an older sister, Maddie, who has provided great support for her younger sisters.

Bailey likes Reading, Math and Language. She enjoys softball and music along with special family time. The Brewers and the Packers are her teams and Aaron Rodgers is her favorite player.

This prompted her mom to comment, “The MACC Fund has offered great support opening doors to allow us to help others. The kids enjoy seeing people helping the MACC Fund to help kids’ treatment.”

Founded in 1976, the MACC Fund (Midwest Athletes Against Childhood Cancer, Inc.) is committed to funding childhood cancer and related blood disorder research. Metro Milwaukee Kohl’s stores will donate 5% of every toypurchase made between Dec. 1 and Dec. 12 to the MACC Fund. New this year is an online auction running from Dec. 1 to Dec. 12, with all proceeds benefiting the MACC Fund.

Visit Biddingforgood.com/Twelvedays to bid on one of a kind auction items.