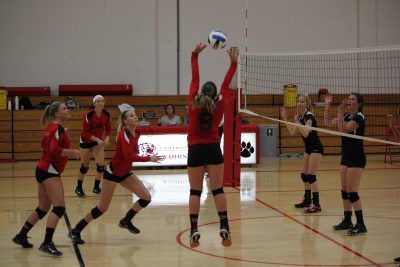 “Our goal for the night was to continue to served accurately and tough, ready in defensive positions and run the fast offense consistently,” said coach Deb Butschlick.  “As a team we served at  87 percent. This is an area that we have struggled with all season, but will continue to work hard to improve our  consistency.

“We change our defense slightly, so the team at times struggled with positioning, but overall we were able to get more touches on the volleyballs.  Kayla Schommer ran some really nice offensive sets during the match.”

Schommer, according to Butschlick, was able to connect more with Kayla Boehm running difference offensive patterns.  “As a team we will continue to work on a general means of consistency and accuracy,” said Butschlick.

The Lady Wildcat’s next match is Wednesday, Oct. 11 at home against UW-Waukesha with a 5 p.m. start time.