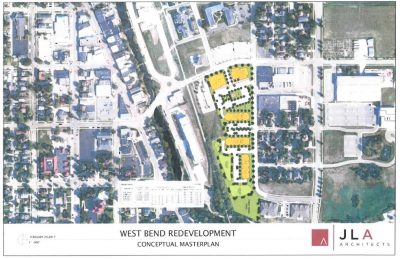 March 21, 2017 – West Bend, WI – A developer from southeastern Wisconsin will spend the next 90 days looking over the former Gehl Company property on Water Street in hopes of building market-rate apartments in the coming year.

During Monday’s Common Council meeting, aldermen returned from closed session to approve a Memorandum of Understanding with WiRed on the development at the Gehl remediation site, Parcel Identification Number 1119.132.0046.

The property is zoned a mixed-use development and according to Mayor Kraig Sadownikow the firm, WiRed has significant experience in mixed-use developments in urban areas such as this.
“If what they have conceptually proposed actually happens it would be an awesome development in our downtown, adding significant tax base to the TIF,” said Mayor Kraig Sadownikow.  “Best case scenario is they would be under construction in very late 2017 but more likely spring of 2018.”
The city of West Bend acquired the property from Gehl over a decade ago. While environmental remediation has taken place the city has been softly marketing the property off and on. The remediation is nearing completion over the past few months the council decided to advertise the property to Milwaukee-area developers.
“The idea was to find out what the free-market thought would work on the site not necessarily have the city push a specific use,” Sadownikow said.
The city received multiple proposals from developers and Monday it approved a relationship with WiRed.