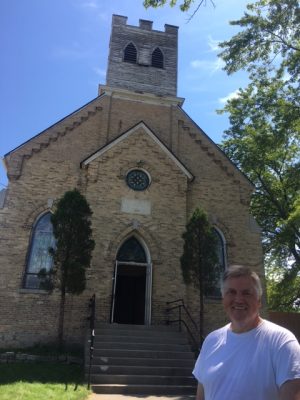 August 1, 2017 – Jackson, WI – One year to the date when Steve Kissinger placed a bid at a sheriff’s sale on the old Friedens Church on Cedar Creek Road his dream

“If I find a collection plate I’m going to put it outside the front door,” said Kissinger.

Dressed in blue jeans and a white t-shirt and garden gloves, Kissinger was celebrating his purchase and questioning his future at the same time. 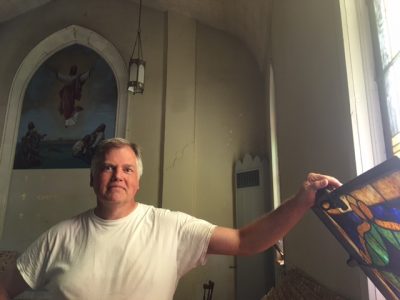 A year ago Kissinger and friend Terry Becker were completing a cemetery tour. Becker’s father and his grandparents were buried in the cemetery next to the church. 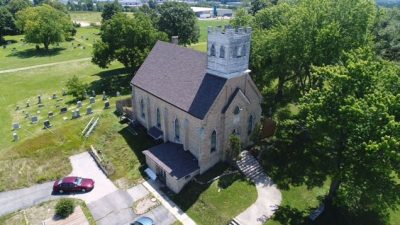 Kissinger started to look at the church and found it in foreclosure.

The bank, according to Kissinger, “wanted WAY too much for it.”

A post published on WashingtonCountyInsider.com in April listed the price at $74,200.

“It never sold and was relisted every week or so. They finally accepted my bid on the July 6 and I closed Friday, July 28,” he said. 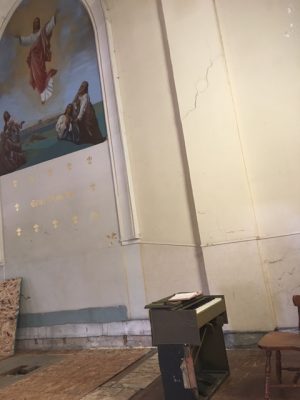 Built in 1878 the former church has definitely been neglected for many years. “It is in very poor condition,” said Kissinger. “And that’s being nice.”

All of the church furniture was removed long ago. Although a new roof was put in place last October there is significant water damage and some leakage. Kissinger has already reconciled “this will be a long-term project.”

He also realizes he has to pace himself. “If the steeple cannot be saved I would like to rebuild it to its original 1878 appearance,” he said.  “My friends are calling it St. Stevens.” 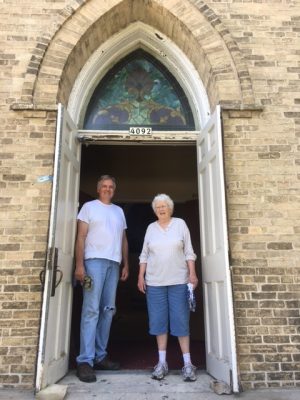 Kissinger’s plan is to work on it during the summer and hopefully have it ready by the time he retires in the next five years.

“I want to restore it and turn it into my own personal museum for all of my collections including a huge collection of the products from the West Bend Aluminum Company,” he said.

Kissinger also thinks it will be the perfect home for his pipe organ.

In the meantime, Kissinger has moved an old WWII pump organ into the building…. and if you listen close you can hear the hymn “Stand up for Jesus” coming through the doorway as you pass by.