No bowing to the false narrative of the Thin Blue Line | by Sheriff Dale J. Schmidt

February 1, 2021 – Washington County, WI – Over the last couple of years, the “Thin Blue Line” flag has become very popular.  For those of you who are not aware, the “Thin Blue Line” refers to the concept of the police as the line which keeps society from descending into violent chaos.  Recently a new spin has emerged which has painted the “Thin Blue Line” flag as advancing “hateful ideologies” being pushed by “extremists” and as a result we must reject the flag altogether.  I counter that argument by asking, should we abandon our American Flag because other “extremists” are using it to promote their misguided “hateful ideologies” as well?  This is an absurd thought and it is infuriating.  I am aware of two law enforcement executives in Wisconsin who have decided to ban the flag in their agencies. To me, this sends the wrong message to citizens and law enforcement. 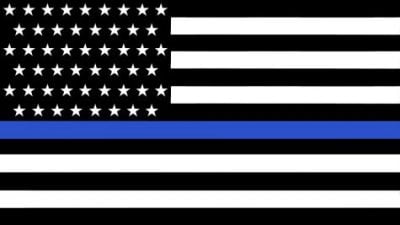 The “Thin Blue Line” flag has been a symbol of support for law enforcement by a very large number of United States citizens. Those who display it typically support law and order.  They support waiting for all facts before casting judgment on any incident. They support law enforcement officers knowing that the vast majority are good people who genuinely want to make their community a better place. They understand that contrary to the false narrative of the media, law enforcement is overwhelmingly color blind as it relates to the law. They also understand that if you break the law, there are consequences regardless of the color of your skin.

The Dodge County Sheriff’s Office will never bow to the whims or false narrative of extremists who hate law enforcement. I am proud of the work my staff does every day.  I am proud our citizens support the work we do. I am proud we have a symbol in that of the “Thin Blue Line” flag that is positive and unifying even though those who hate law and order and law enforcement are hateful toward the flag. To me, the “Thin Blue Line” flag represents that we in law enforcement are the last line of defense for law and order and we will stand up for what is right in the face of adversity. We will stand up for the Constitution of the United States and everything the American Flag represents.

Of course, everyone has the right to their own opinion on this matter, and I respect everyone’s constitutional right to their freedom of speech. However, no one has the right to trample on anyone else’s right to free speech if they choose to display the “Thin Blue Line” flag and support our brave men and women in law enforcement. I will defend that constitutional right to support law enforcement, just as any other right that has been afforded to the citizens of our great nation. Thank you for supporting us and thank you for allowing us to work hard toward making Dodge County a safe and enjoyable place to live, work, and visit.