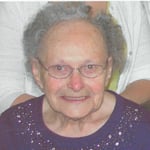 Feb. 9, 2018 – Slinger, WI – Audrey A. Nehm (nee Kuhaupt), age 90, passed away on Wednesday, February 7, 2018 at her residence in Slinger. She was born on November 28, 1927 in Richfield, WI to William and Minnie (nee Funk) Kuhaupt. Audrey worked a short time at Thiel’s Mill in Slinger where she met her love, Robert G. Nehm.
They were married on October 23, 1948 at St. John’s Evangelical and Reformed Church in Slinger and together they raised a family of 6 children.
Audrey enjoyed gardening, canning, helping out at the greenhouses, floral shop and spending time with customers. She had a tremendous memory about dates and weather. Audrey loved watching the kids’ and grandkids’ sporting events and was a loyal Badger fan. She was a lifelong member of Faith UCC and was involved in many church activities.

A special thank you to Judy Wagner, for the many years of kind and loving care for both mom and dad, Elaine and Cathy for their special support and friendship, Dr. Patricia Liethen and nurse Debbie for their compassionate care and concern.