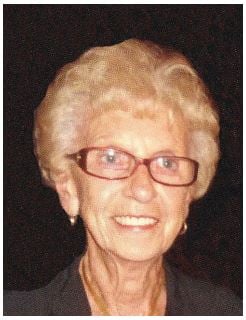 She was born at home on December 11, 1933 to the late Monroe “Bob” and Lorena (nee Krueger) Stahl in the Town of Scott. She was baptized on January 7, 1934. On March 30, 1947 Bev was confirmed at the United Church of Christ in Beechwood. She grew up on the family farm one mile north of Beechwood. She attended grade school at Beechwood Elementary and graduated from Kewaskum High School in 1951. After school, Bev worked at the West Bend Company.

On November 7, 1953 she was united in marriage to Louis Luedtke, and together they raised four children.

Bev was always very hard-working; she had a full-time job on the farm but always made sure to prepare three good meals a day, keep the house as clean as possible, and did a lot of sewing, making some of the children’s clothes, patching never-ending holes, and quilts.

Bev was known for her hearty cooking, her delicious apple pies, and her beautiful handmade quilts. She also enjoyed gardening, planting perennials, and dancing (when she was talked into it). After retiring from the farm, she worked in a preschool at the Samaritan in West Bend, preparing meals and picking up children. Bev drove school bus and later worked at St. Joseph’s Hospital in West Bend in the laundry department.

Bev was always there to lend an ear and give advice, or just a hug when needed. She was the glue that held the family together, always putting the needs or desires of her family before her own, willing to give up the things she wanted to do to make someone else happy. She will be dearly missed by all who knew her.

In addition to her parents, she is preceded in death by her sister, Eunice (Willard) Eimmermann; a brother, Donald (Barb) Stahl: ten brothers-in-law and ten sisters-in-law; a daughter-in-law, Beady and a great-grandson, Noah Wilson.

A funeral service in remembrance of Bev will be held at 3 p.m. on Sunday, October 21, 2018, at Immanuel Lutheran Church, W8497 Brazelton Dr., Random Lake. Burial to follow.

The family will greet relatives and friends at the church on Sunday from 1 p.m. until the time of service. In lieu of flowers, memorial to the family for a donation to a charity of their choice is appreciated by the family.

The Myrhum Patten Miller & Kietzer Funeral Homes have been entrusted with Bev’s arrangements.