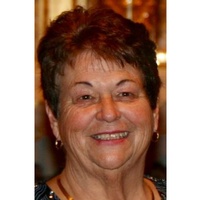 Diane was born August 9, 1940 to Alvin and Emma Koenings in West Bend. She grew up in Barton where she graduated from St. Mary’s Immaculate Conception and West Bend High School.

She married Raymond (Pete) Roskopf in Barton on February 7, 1959 and after a few years living in Goldendale they moved to West Bend in 1961 and raised their family. Diane loved to spend time nurturing her children and grandchildren and enjoyed watching them in their many activities in school.

She also enjoyed planning and organizing family vacations and the annual Christmas, Easter and Thanksgiving celebrations. She worked and volunteered numerous hours at Holy Angels helping out with bookkeeping, the annual festival, hot lunch program and many other activities. For many years she enjoyed watching Pete play softball and other sports where she met many of her dear life-long friends.

She enjoyed bowling, playing sheepshead with the family and the game of bridge with her friends. Later in life she learned to appreciate the game of golf. Even though she took many strokes she always wanted the game to keep moving along, so much so that she eventually became a ranger at Hon–E-Kor for many years encouraging the players to keep pace. One of her joys was making trips to her favorite casinos and to Aruba where she and Pete met many new friends.

In addition to her parents, she was preceded in death by her sister, Dorothy “Tina” Gonnering.

Diane’s family would like to thank the many clinicians and doctors who cared for her in her last two months. They are especially grateful for the kind and wonderful care provided by the staff at the Kathy Hospice.