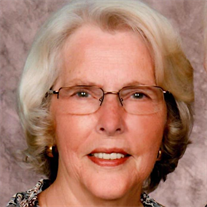 Dorothy was born in Rice Lake, Wisconsin on October 2, 1934 to the late Garrit and Sophie (Stoik) Van Beek. On December 6, 1952 she was united in marriage to Roger Schultz in Sarona, Wisconsin. She would have been married to the love of her life for 65 years in December. Their mutual love and respect for one another was a true example of what marriage should be and is to be envied.

Some of Dorothy’s most loved past times included loving her family, sewing, quilting, fishing, gardening, crocheting, watching birds and wildlife from her living room window, and baking. In the words of her great-grandsons, Isaiah and Noah, “Great Grandma was the world’s best baker.” No one ever left her home without being given a bag of cookies. Dorothy’s selfless acts of kindness and love included tireless hours of crocheting items to be given to her church for those in need, and endless baking to provide treats for those she loved. She was “Mom” to many.

Dorothy was a hard working woman who, for those who knew her would attest, could run circles around the best of them. She took every opportunity to share her gifts, skills, and knowledge with her grandchildren and great-grandchildren, and was a positive mentor in their lives. She always had a smile and a hug, and was the sunshine of their lives.

A memorial service for Dorothy will be held on Saturday, October 21, 2017 at 11:00 AM at Zion Lutheran Church in Shawano, with visitation beginning at 10:00 AM. Pastor Scott Ludford will officiate. Private family inurnment will be in the Christ Lutheran Cemetery in Jackson, Wisconsin at a later date.

Mickelson Funeral & Cremation Service of Shawano is assisting the family with arrangements.