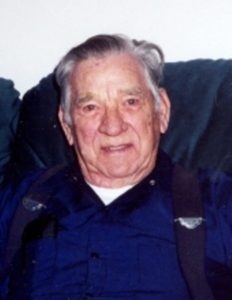 Edwin F. Bretschneider passed away on Tuesday, September 13, 2016, at the Kettle Moraine Gardens, in Kewaskum, at the age of 96 years.

Edwin was born on July 24, 1920, the son of the late William Bretschneider and the late Ida (nee Wilkens) Bretschneider. He served his country in the United States Army, with the 40th Engineers during WWII, from 1942 until he was honorably discharged, in 1945. He was later united in marriage to Lillian Sudbrink, on October 23, 1948, at St. Paul Lutheran Church, in Grafton. Their marriage was later blessed with three children.

Edwin was a dedicated employee of Grob Inc., in Grafton for over 45 years, working as a foreman. Upon his retirement from Grob, Edwin began attending craft shows with his wife, selling various woodworking projects which he had built throughout the years.

Edwin was a past member of the Newburg Fire Department, as well as a lifelong member at St. John Lutheran Church, in Newburg. He enjoyed traveling and especially enjoyed his yearly excursions with the 40th Engineers. He and his wife spent many days at their summer cottage near Merrill, where Edwin got a chance to catch up on fishing, but his true love was spending time with his grandchildren.

A Funeral Service will be held on Tuesday, September 20, 2016, 2PM at St. John Lutheran Church (623 Congress Dr.), in Newburg, with Rev. Kurt Schaser presiding. He will be laid to rest following the funeral service next to his beloved wife, at Washington County Memorial Park. The visitation will be held on Tuesday, at the church, from 12 Noon until 2PM. In lieu of flowers, memorials to St. John Lutheran Church are appreciated. Please visit www.muellerfuneralhome.com to view the Edwin F. Bretschneider video tribute or to send online condolences to the family.