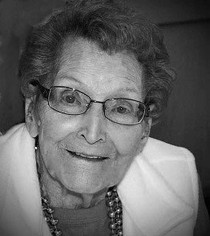 She was born in Hollister, Wisconsin on August 29, 1924 to Leonard and Edith (nee Meeks) Clay.  She graduated from Hollister School with highest honors and was later one of those daring young women who stepped up for the war effort in the 1940s by going to Chicago to work in a defense plant, where she assembled the wiring in radios used in B29 airplanes.

She returned home after the war, married and raised five children. Ella went on to work as bookkeeper at Gateway Potato Corporation, a successful brokerage company she owned with her husband. She was an accomplished quilter and avid reader, but found her greatest joy in her family.

She is further survived by nieces, nephews, other relatives and friends.

A private Graveside Service will take place per Ella’s wishes.