Obit: Herman J. Stadler age 91 of Newburg. Herman was a member of the Newburg Fire Department in his younger years. 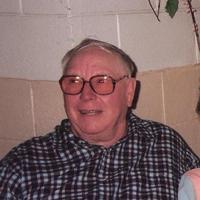 Herman worked for Mercury Marine in Cedarburg for over 25 years. After retiring he enjoyed driving the big tractors and working on the farms of Alois Fechter of Saukville and Ed Stemper and John Kertscher both of Fredonia.

He enjoyed traveling to many states in the west and south east. He was a league bowler for many years for businesses in Newburg and was also a member of the Newburg Fire Department in his younger years. He made his home in the Village of Newburg for many years until moving to the Cedar Lake Health Care Center about 3 years ago.

Herman enjoyed going fishing and hunting with his friends and family members and also going on a few casino runs.

He is survived by his brother Rudy (Marcy) of the Town of Saukville and his 11 nieces and nephews. He was preceded in death by his parents, John and Philomena, and his siblings: Elsie (Sigfried) Primas, Ann (Wilmer) Kertscher, Theresa Stadler and Violet, Charlie and Adolph who all died in childhood.

A memorial service will be held Thursday, February 9, 2017 at 6:00 p.m. at the Schmidt Funeral Home in West Bend with Rev. Jerome Repenshek officiating. The family will greet visitors from 4:00 p.m. until 5:45 p.m.

Rudy and his wife Marcy would like to say a special thank you to the staff at Cedar Lake Home Campus for their care and compassion for Herman during his stay, also to his nephew Russ Stadler and his wife Corey for the help maintaining his property and all his medical needs in his later years.

Previous articleObit: Ruth A. Little (nee Stockhausen), 90, of West Bend. Ruth cycled 8931 miles on her stationary bicycle and she never said “no” to travel.
Next articleObit: D. “Dan” Dolde, 88, of West Bend. Dan was an engineer at the West Bend Company for 32 years.