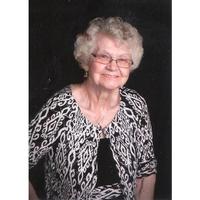 On June 3, 1941 she was united in marriage to Edwin N. Depies at Holy Cross Catholic Church in Belgium and made their home in Port Washington for 45 years until moving to West Bend in 1986. He preceded her in death on December 16, 1990.

LaVerne started her working career cleaning homes in Milwaukee, traveling by train from Port Washington. She then worked as a waitress at Smith Bros. in Port Washington before working at the West Bend Company until her retirement. After retirement LaVerne enjoyed traveling with friends.

LaVerne retired in 1985 but never stopped working. She volunteered for Meals on Wheels, the Samaritan Auxiliary and St. Frances Cabrini Parish. At St. Frances Cabrini she was a member of the Christian Women and enjoyed working at their rummage sale every year. She was also a member of the Haiti Mission team, traveling to Haiti to help cook for the team and care for the children.

She is preceded in death by her parents, Anthony and Mary Van Treeck, her husband Edwin Depies, her sister Bernice Lanser, her brother Marvin Van Treeck, her son-in-law Ernst Kamm and a great-granddaughter Clara Depies.

A Mass of Christian Burial will be held Monday, March 20, 2017 at 11 a.m. at St. Frances Cabrini Catholic Church in West Bend with entombment in St. Mary’s Cemetery in Port Washington. The family will greet relatives and friends on Sunday, at the Schmidt Funeral Home in West Bend from 4 p.m. a prayer vigil at 6:00 p.m. and also Monday at the church from 10:00 a.m. until 10:45 a.m. Memorials to St. Frances Cabrini Haiti Mission are appreciated.

The family wishes to extend a special Thank You to Dr. Jahnke at Aurora Health Care and the wonderful caregivers at New Perspectives of West Bend and Serenity Hospice for their tender and loving care.