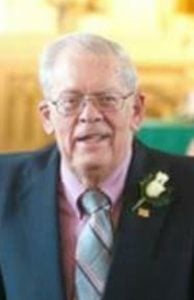 Leonard was a member of Holy Trinity Catholic Church in Kewaskum. He was a proud retired teamsters local 200 member. Leonard enjoyed his family and grandchildren immensely. He will be fondly remembered for his big heart and his words of wisdom.

In addition to his parents and Victoria, Leonard was preceded in death by a daughter, Barbara Nield; brothers and sisters.

A Mass of Christian Burial for Leonard will be held at 6:00 p.m. on Friday, July 15, 2016, at Holy Trinity Catholic Church in Kewaskum with Rev. Mark Jones officiating. Burial will take place at 9:00 a.m. on Saturday at Resurrection Cemetery in Mequon.

Leonard’s family will greet relatives and friends at the church on Friday from 3:00 p.m. until the time of Mass.