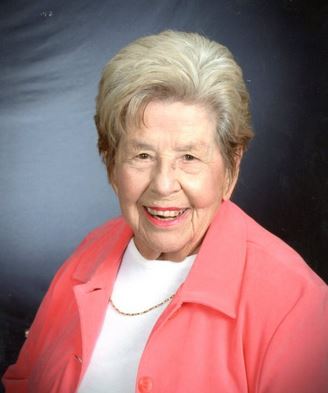 She met her husband-to-be, William Arthur Nielsen, of West Bend, at the University of Wisconsin. They were united in marriage on August 12, 1944 in the First Presbyterian Church in Wausau.

During the time her husband was serving his medical internship at Germantown Hospital PA, Margaret taught in a school of nursing in Germantown, PA. Margaret and her husband, Dr. Nielsen, returned to West Bend in 1947 where he practiced medicine for 47 years. He died in 2009.

Margaret was a member of Trinity Lutheran Church in West Bend. She was active in many community programs and activities.

She served on the West Bend Board of Education, including four years as President. She was a member of the West Bend Police and Fire Commission and the Mayor’s Committee on Restructuring Local Government.

She was active in the Washington County Medical Auxiliary, developing scholarship programs for nursing students. Margaret was a member of the West Bend Country Club, serving as President of the Women’s Golf Association, and the Cedar Lake Yacht Club. These activities and the people with whom she worked all played an important part in her life. She corresponded with friends, relatives, and fellow workers throughout the country. Margaret presently was serving on the University of Wisconsin -Washington County Council.

Margaret continued to be active in many projects and programs involving nursing and education. She enjoyed genealogy, family history, bridge, golf, family reunions, travel, and Cedar Lake activities in the summertime.

In addition to her parents, Margaret was preceded in death by her sister, Ruth (Arthur) Prehn Vint, and brother, Charles (Marion) Prehn.

A memorial service in remembrance of Margaret will be held on Friday, December 2, 2016 at 11:00 a.m. at Trinity Lutheran Church, 140 N. 7th Ave., West Bend. Inurnment will follow at Washington County Memorial Park.

The family suggests memorial donations be made to the Nielsen Scholarship Fund of the UW Madison Alumni Club of Washington County or to the building fund of Trinity Lutheran Church.