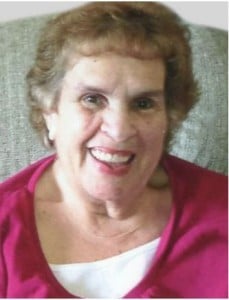 She was born on October 3, 1941 to the late Joseph and Catherine (nee Bucholtz) Wagener in Milwaukee. She graduated from Mercy High School in 1959. On August 31, 1963, she was united in marriage to Richard Uhlenkamp.  Richard preceded Virginia in death in 1983.

Virginia raised seven children and worked at Meurer’s Bakery from 1975 until 1999 in Milwaukee.  She later worked at Pick n Save and then at Buzz Connects Answering Service.

Virginia loved to cook, bake and crochet.  She enjoyed doing the “total grandma stuff.”  She loved spending time with family, especially her children and grandchildren.

In addition to her parents and husband, Richard, Virginia was preceded in death by a sister Mary Wagener.

Virginia’s family will greet relatives and friends Thursday, March 17, 2016 at the Myrhum Patten Miller & Kietzer Funeral Home, 1315 W. Washington St. West Bend, from 4:00 p.m. – 8:00 p.m. with a remembrance service at 7:00 p.m. Virginia’s family will also greet relatives and friends at the church Friday March 18 from 10:00 a.m. until the time of Mass. A private inurnment will be held at a later date.

A special thank you to her dear daughter Joanne who gave her unconditional care these past 10 weeks.

The Myrhum Patten Miller & Kietzer Funeral Homes have been entrusted with Virginia’s arrangements.  Additional information and guest book may be found at www.myrhum-patten.com.