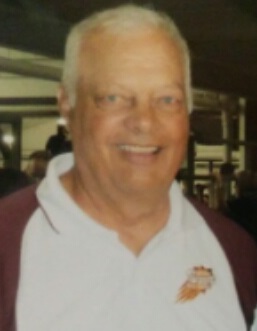 Al was born on October 29, 1943 to Charles and Eleanor Carrier, and was a member of the Congregational UCC.

As the middle brother between Chuck and Bill, Al grew up in Edgerton, WI, where he developed his love for travel and ice cream. He cultivated his love of tennis and teaching at UW-River Falls. Al began his lifelong career as a West Bend middle school teacher, and later received his Master’s degree. He married Patricia “Pat” Thomson, the love of his life, on May 22, 1971 in Ridge Run Park. Al surprised his new wife with a tent, a map, and a plan to camp their way to California. This road trip led to many other traveling adventures for the couple and then with their four children, Erica, Nathan, Katie, and Anna.

Al had a lifelong love of sports and could be seen on various courts and fields as a player, official, fan, or coach. His passion was tennis. He coached West Bend East tennis for 45 years, and greatly enjoyed his own playing time. When not on the court, Al could be found reading, working crossword or jigsaw puzzles, helping others, or volunteering at the Full Shelf Food Pantry where he also served as a board member. Al was known for his dry sense of humor, but more importantly for being a family man. He took great pride in his four kids, as he modeled the things he valued most in life: faith, family, education, strong work ethic, and sportsmanship.

Survived by his spouse Pat and his loving children: Erica (Sachin) Patel of Nashville, TN, Nathan (Talia) Carrier of Hudson, Catherine (David) Astrauskas of Sun Prairie, and Anna (Ian) Johnson of La Crosse, and his seven adoring grandchildren: Annika and Taran Patel, Caroline and Claire Carrier, Zane and Nora Astrauskas, and Isaac Johnson. He is further survived by his elder brother Charles of Oostburg, and sister-in-law Kay Carrier of Bozeman, MT, as well as in-laws Shirley (George) Yatso, Nancy Rosner, Lynn (Michael) Lord, and Mary (Larry) Bittner, nieces, nephews and cousins. He will be missed by family, friends, the Holy Angels community, and many former students and players.

He was preceded in death by his parents Charles and Eleanor, his younger brother William, his mother-in-law Genevieve Thomson, sister-in-law Lily Carrier, and brother-in-law Ken Rosner.

A celebration of Al’s life will be held on Tuesday, March 5 at Holy Angels Catholic Church in West Bend with a Mass of Christian Burial at 6:00 p.m. The family will greet visitors from 3 p.m. until 5:45 p.m. In lieu of flowers, honor Al and choose to be kind. Share acts of service and love. Memorials can be made to the Full Shelf Food Pantry, West Bend Tennis Association to benefit West Bend tennis programs, or the charity of your choice.