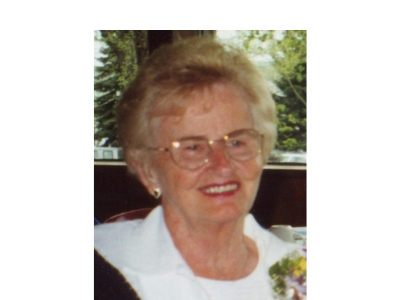 Alice was born on February 22, 1928, in Campbellsport the daughter of the late Francis “Frank” and Anna (nee Schneider) McNamara. On May 9, 1951, she was united in marriage to Glenway “Glen” Taylor Jr. at St. Matthews Catholic Church in Campbellsport. Glen preceded Alice in death on July 13, 2007.

Alice grew up farming on the McNamara family farm located in Campbellsport. Alice enjoyed traveling with her family and gardening. She enjoyed baking cookies and playing games with her grandchildren. Alice was a devout Catholic and practiced it regularly.

A Mass of Christian Burial will be held on Monday, April 22, 2019, at 4 p.m. at St. Mary’s Immaculate Conception Church, 1610 Monroe Street in West Bend. Rev. Justin Lopina will officiate and burial will be in Washington County Memorial Park in West Bend on Tuesday at 10:30 a.m. Visitation will be at the church on Monday from 2 p.m. until 3:45 p.m.

Alice’s family extends their heartfelt appreciation to the staff at Cornerstone Assisted Living and Serenity Hospice for the loving care they provided.