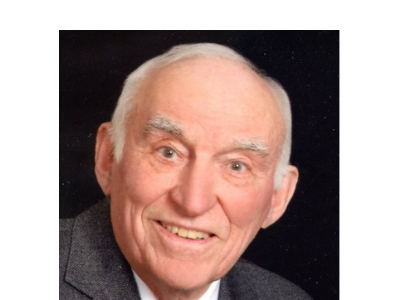 Alvin was born on the family homestead in the Town of Belgium on March 13, 1929, son of George and Helen (Katheiser) Schueller.  He served honorably in the United States Army from 1954 – 1956, stationed in Kaiserslautern, Germany with the Guided Missile Unit.

On May 11, 1963, he was united in marriage to Audrey Bares at Holy Cross Catholic Church in Belgium.  They raised their 5 daughters on the family dairy farm.  They sold the farm in 1992.  Alvin was then employed as a seasonal worker at Kettle Lakes Co-Op in Random Lake for the next 19 years.  He enjoyed keeping in touch with the farmers in the area.

He was a former active member of Holy Cross Parish, serving as an usher, lector and Eucharistic Minister.  He also served on the Parish Council as well as the Cemetery Association and the Building and Grounds Committee.

He served on the Town of Belgium Board of Appeals and was a member of various farm-related organizations.  He enjoyed the many years he served on the Board of Directors of the Ozaukee County Farm Bureau and East Central Select Sires.

In 2014, Alvin and Audrey moved to Cedar Ridge Retirement Community in West Bend where they have enjoyed an active life with friends.

Alvin is further survived by his brother, Norman of Sheboygan; sister and brother-in-law, Audrey and Ambrose Krier of West Bend; and sister-in-law, June Grandlic of Grafton, as well as nieces, nephews, other relatives and friends.

A Mass of Christian Burial will be held at Holy Angels Catholic Church (138 N. 8th St., West Bend) at 11am on Wednesday, February 13, 2019, with Father Pat Heppe officiating.  Interment at Holy Cross Cemetery in the Town of Belgium.

Alvin’s family will greet relatives and friends at the Church on Wednesday from 9am until the time of the service.