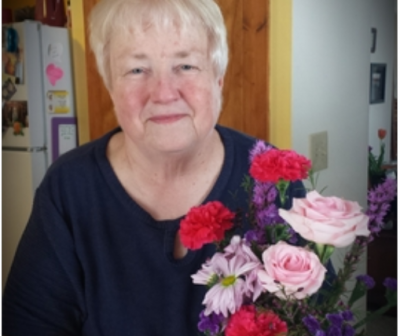 Janet loved spending time with her family and friends. Living on the lake offered her many hours of laughter and joy surrounded by her loved ones. Her motto was “the more the merrier “. After she retired, she spent much of her time helping with her grandchildren, in the seemingly endless shuttling of kids to after school activities and later, their jobs. Janet was always there to lend a hand or a kind word of encouragement.

She enjoyed going to the theater, whether that was a play, musical, ballet, or simply watching movies on the big screen. She was also an avid reader, and lover of a good story. Janet was fond of planting flowers in her yard and enjoying the beauty of the small lake where she lived and loved all the animals that would come to visit. Perhaps one of her most favorite pastimes, however, was catching up with her family and friends. She was a great cook and was known for making multiple cakes on the occasion of there being more than one birthday being celebrated at any given party.

Above all else, Janet was a kind, gentle, loving, and eternally compassionate soul. Whenever anyone came to her in search of comfort or advice, she had just the right thing to say. Heaven gained a beautiful angel this past weekend. Although we know she is finally reunited with Alan, and so many others who have gone before her, we will miss her dearly.

Janet is survived by her three loving daughters and their families: Becky Kozak, Wendy (Pat) Lightner, Amy (Tait Duus) Ehn; grandchildren – Kaitlyn and Kyle Kozak, Brandon (Jora) Ehn, Paige, Sophia, and Elizabeth Lightner; great-grandchildren – Wesley, Leighona, and Adeline; as well as her brother Kenneth (Suzanna) Lein. Further survived by numerous nieces, nephews, cousins, other relatives, and friends. She was preceded in death by her parents, and by her husband, Alan Ehn.

A Memorial Service for Janet will be held at 3 p.m. on Sunday, February 9 at Our Savior’s Lutheran Church, 1044 S Silverbrook Dr. West Bend, with Rev. Paul Ihlenfeld presiding. Visitation will be at the church on Sunday from 1 p.m. until 2:45 p.m.

“While we are busy planning, God is busy laughing.”

“When we change the way we look at things, the things we look at change.”