March 20, 2019 – West Bend, WI – Michael G. Roeber of West Bend died on Sunday, March 17, 2019 at age of 51 years.  He was born on September 10, 1967 in Aberdeen, SD to John and Marion (nee Koeck) Roeber.  He attended local schools, graduating from Tulare High School with the Class of 1985.  He then went on to attend South Dakota State University in Brookings, SD, earning a degree in electrical engineering. 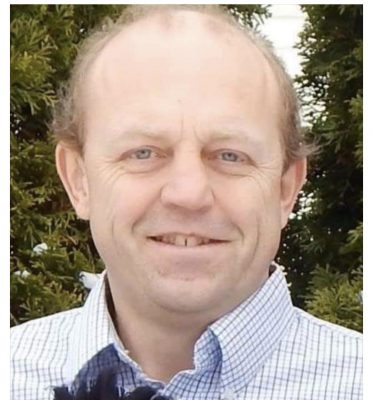 After graduating from college, he worked for a small company in South Dakota for a short time before moving to Iowa where he worked for Power Products.  He was later transferred to Illinois.

On August 30, 1997, he was united in marriage to Mary J. Koster in Morrison, IL.  They made their home in Illinois, living in Woodstock where their children were born.  In 2010 the family moved to West Bend and he started working at what is now Hubbell Acme Inc. in Milwaukee.

He was a very active member of St. Frances Cabrini Catholic Parish where he volunteered as a scout leader for the Boy Scouts Troop 796, and was a member of the Fr. Casper Rehrl Council #1964 Knights of Columbus in West Bend.

He was preceded in death by his father John and 1 brother-in-law Fred Koster.

A Mass of Christian Burial will be held on Friday, March 22 at 6:30 p.m. at St. Frances Cabrini Catholic Church.  Private burial will be held.  The family will greet relatives and friends during a period of visitation at church on Friday from 2:30 until 6 p.m.  There will be a Knights of Columbus prayer service to honor their Brother Knight at 2:30 p.m. Friday at St. Frances Cabrini Church and Knights of Columbus 4th Degree Honor Guard Sentinels will stand post throughout the visitation.

The Schmidt Funeral Home of West Bend is serving the family.  On-line guestbook and condolences available at www.schmidtfuneralhome.com.