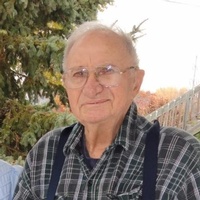 He was born on August 25, 1923 in Barton, WI to Arthur and Anna (Schneider) Duenkel.  Butch grew up in Barton, attended St. Mary’s Grade School and graduated in 1941 from West Bend High School, where he lettered in baseball.

After graduation, Butch enlisted in the U.S. Navy, serving in World War II from 1942 to 1946 as an Aviation Metalsmith.   After the war, he returned to Barton and played baseball, pitching for Barton A.C., West Bend Benders, Moose Lodge, and West Bend Lithia in the Rock River, Land of Rivers and Land of Lakes leagues.

On June 26, 1948, Butch was united in marriage to Phyllis Gogert at St. Mary’s Immaculate Conception Church and settled in Barton. They have been married for 70 years and have remained members of St. Mary’s Parish.

He began his career as an electrician, eventually establishing his own business, Duenkel Electric.   He wired many homes and businesses throughout the West Bend area.  Later on, he was an electrician at Regal Ware in Kewaskum until his retirement in 1986.

Butch is survived by his wife, Phyllis; his son Tom (Vickey), daughters Sandy (Jerry) Haupt and Karen (Joe) Pascoe; grandchildren Tom, Jr. (Pearry) , Liz and Sarah Duenkel; and great grandsons Parker and Logan.   He is further survived by his sisters-in-law, Eileen Duenkel and Mae Kleifgen, and many nieces and nephews.

He is preceded in death by his parents, Arthur and Anna Duenkel; brothers Edward, Arthur Jr., Albert, Carl and infant brother Joseph; sisters Marie Frings and Ruth Bruesch, his twin; and brothers-in-law and sister-in-law Joe Kleifgen and Rodney and Ethel Gogert.

The family would like to sincerely thank Dr. Mosley and his staff and Serenity Hospice for their compassionate care.  The family also appreciates the support of great neighbors.

The Schmidt Funeral Home in West Bend is serving the family.  Online guest book and condolences are available at www.schmidtfuneralhome.com.