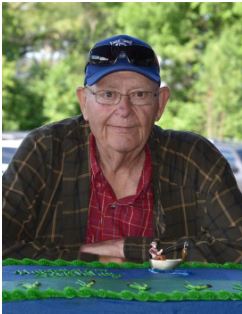 Dick was born on June 24, 1943 in Milwaukee to Richard William and Esther Hilda Fischer (Battermann).

Dick graduated from West Bend High School in 1961.  He was co-owner, with his brother Tom, of the Fischer Shell Garage until 1977.  Then he worked at Tesker Manufacturing, followed by employment with the Town of Trenton as the Public Works Director until he retired in 2005.  Dick’s hobbies included fishing/ice fishing, camping, cooking, and drinking Old Fashions.  He was a member of the Great Lakes Sports Fishing Club, Ozaukee Chapter where he was known as the Captain of his boat, “Old Salt.”  Dick was a past member of the Newburg Fire Department.  He served as usher for many years at Holy Trinity Catholic Church in Newburg.

Dick would always say, “I can fix anything from a manure spreader to an airplane.”

In addition to his parents, Dick was preceded in death by his son, David Edward Fischer; and brother, Donald Fischer.

Dick’s family will greet relatives and friends at Church on Saturday from 10 am until the time of service.  In lieu of flowers, direct memorials to the American Cancer Society in Richard’s name.

Dick’s family extends their heartfelt appreciation to the staff at Kraemer Cancer Center, Dr. Colin Mooney and Dr. Jeffery Smale for the loving care they provided.

The Myrhum Patten Miller & Kietzer Funeral Home of West Bend has been entrusted with Dick’s arrangements.