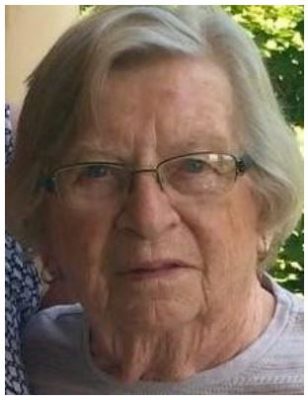 Virginia was born on July 12, 1923, in West Bend, the daughter of the late Elmer and Linda (nee Binder) Bastian. On December 9, 1944, she was united in marriage to Edward Backhaus at Emmanuel United Church of Christ in West Bend. Edward preceded Ginny in death on January 16, 1986. On September 24, 1986, she was united in marriage to Roy Warner at St. John’s Lutheran Church in West Bend. Roy preceded Ginny in death on November 24, 2014.

She was a charter member of Hon-E-Kor and enjoyed golfing to the age of 90. Ginny’s family and friends enjoyed many homemade treats. She loved keeping up with the antics of the grandchildren and greatgrandchildren – they always could bring a smile to her face.

In addition to her husbands and parents, Ginny was preceded in death by a daughter, Lynn Miller; a brother, Dave Bastian; and a sister, Ann Mae Bastian.

Ginny’s family will greet relatives and friends at the Myrhum-Patten Funeral Home, 1315 W. Washington Street, in West Bend on Saturday, July 11, 2020, from 10:00 a.m. until 10:45 a.m. There will then be a procession from the funeral home to St. John’s Lutheran Church, 609 South 6th Avenue, in West Bend for a Celebration of Life at 11:00 a.m. Rev. Michael Schram will officiate and burial will follow at Union Cemetery in West Bend.