April 18, 2019 – Germantown, WI – The budget process is underway at the Capitol and around the state. The Joint Finance Committee recently kicked off its budget work, holding agency briefings here in Madison. Each budget cycle, Secretaries from many of the major state agencies are invited to brief the committee on their section of the budget proposal and answer questions. Public Hearings also began on April 5 in Janesville, followed by stops in Oak Creek on the 10, and River Falls on the 15. The final hearing will be in Green Bay on the 24. 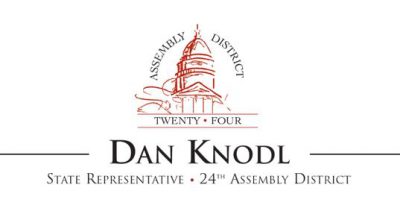 Like many other legislators, I held two budget listening sessions on the evening of April 15; one in Brown Deer and one in Germantown. Thank you to everyone who took time out of their busy schedules to stop by. I enjoyed passing along some information about the proposed budget and how the process works. I also enjoyed the discussion and thoughts you provided. My 2019 Budget Survey should be hitting mailboxes in the near future as well. I encourage everyone to fill it out and return via mail, or you can fill it out online at RepKnodl.com.

As I’ve mentioned before, my colleagues and I in the Legislature sent a letter to Governor Evers back in January laying out eleven policy areas where we believe we can find common ground including: tax relief, childcare affordability, workforce development, homelessness, clean water, and others. Our hope was that these could serve as a starting point for discussion as legislation and the two-year budget are crafted. Republicans and Democrats are going to have policy disagreements on many things and that is understandable, but that doesn’t mean there aren’t areas where we can work together. That’s why it was so disappointing when Governor Evers delivered a budget proposal full of divisive policies.

Over $1 billion in tax increases, massive spending hikes, driver’s licenses and in-state tuition for illegal immigrants, increased property taxes, and expanding welfare are some of the items Governor Evers included in his budget proposal that were never going to find majority support in the Legislature. The budget process has always been about negotiation between the Legislature and the Governor to craft a bill that has the support of both branches of government and will help our state move forward. That process is the same now with split government as it was for the last eight years.

After the statewide public hearings are finished, the Joint Finance Committee and Legislature will begin working on the budget bill, making changes, and turning it into a finished project that’s ready for a vote in the Assembly and Senate. My goals for this budget are to protect the positive reforms we’ve made over the last eight years that reduced the tax burden on families, increased education and career opportunities for students, and helped address the cost of healthcare.

We have a lot to be proud of in Wisconsin. Our unemployment rate has been at or below 3% for 13 continuous months. The state tax burden is at its lowest point in 50 years after we cut taxes by over $8 billion and we ended the most recent budget with a nearly $600 million surplus. We increased public school funding by more than $630 million in the last budget, and put more money into local road and bridge aid too.

While there are many potential areas of common ground that we can work on with the Governor in this budget, I will continue my efforts to protect taxpayers’ wallets and keep our positive and common sense reforms in place. I look forward to the opportunity to work with new members of the Legislature as well as the new administration to craft a workable state budget that moves Wisconsin forward.