By Judy Steffes
December 20, 2017
Facebook
Instagram
Twitter
558
Dec. 20, 2017 – West Bend, WI – A parent with a child in the West Bend School District contacted police today after a survey was given to 8th graders questioning their sexuality.
“If I walked up to a 13 year old on the street and started asking these questions I’d be put in the back of a squad,” said the parent, who prefers to remain anonymous to protect his child.
The parent noted he called police because “that teacher and that school subjected all these kids to child abuse today. I was told this was a segue into a new lesson plan about civil rights. The part that concerns me is a whole lot of questions have nothing to do with education whatsoever, especially the ones about parent finances.”
The “Privilege Test” was marked “optional” however the parent said the “kids get scored on participation and that goes on their report card.” Plus he noted, “What’s a child to do when the teacher hands it to you during class… if you’re a good kid you’re doing what you’re told.”
The parent said he felt bad because he’s been telling his kids to “listen to the teacher…. but I never thought they’d be asking them this.”
The parent said a couple weeks ago the kids were asked gun questions and if they had guns in the house. “They’re milking our kids for information and to not tell the parents. Even the principal and vice principal had no idea this was being circulated,” he said.
Another parent who saw the survey posted on West Bend Area Buy, Sell, Trade sent this note:

I learned about this survey when it was posted on West Bend Area Buy/Sell/Trade to which I belong. This is a screen shot of the survey. Note: The WBSD said they were not going to consider giving out the YRBS until early next year, and then only to the high school students. Again, this is NOT the YRBS. It is titled, “Privilege Survey.”  That’s why parents are going off the rails on this one. They shut the comments off under the post, then removed the post all together. Too late. I have the screen shot now. Talked to a middle school parent who was unaware of any such survey.

When I find out more, I’ll let you know.

Some of the questions are:

I have never tried to hide my sexuality.

I have never been called a derogatory term for a homosexual.

I never doubted my parents’ acceptance of my sexuality.

I have never been told that I “sound white”

I am always comfortable demonstrating PDA with people I like.

Nobody has tried to “save me” from my religious beliefs.

About 3:30 p.m. a police squad was seen at the school. Principal Dave Uelmen indicated he had no comment and directed all questions to Nancy Kunkler with the West Bend School District.
West Bend police confirmed receiving a call from a parent and said this was a school district issue.
School board members refused to comment on the situation; most said they had no idea this occurred.
I have asked the district for a copy of the survey and they said I had to put in an Open Records Request to see it. 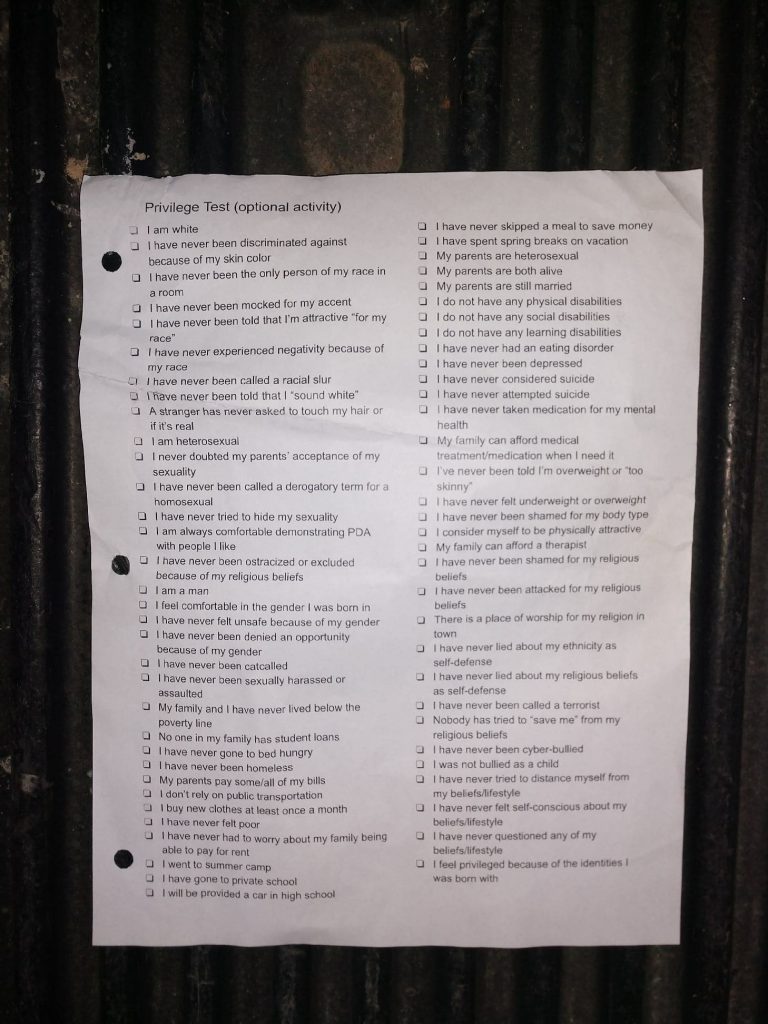 Below is a letter Uelmen sent to parents at Badger Middle School.

Badger Middle School English Language Arts students in 8th grade are currently in the module entitled “Working with Evidence: Taking a Stand.” These units utilize Pulitzer Prize-winning novel To Kill a Mockingbird. The learning target of the lesson was, “I can understand the literal and figurative meaning of Atticus’s word choice in the closing speech. I can analyze how Atticus’s closing speech relates to the themes of taking a stand and the Golden Rule.” During the lesson, some classrooms deployed an optional, anonymous survey that was not derived from district curriculum. The survey was part of a follow up activity to discuss privilege as a lead-in to the “Civil Rights and A Mighty Long Way” module. The survey did not, in any way, count as a grade, nor was it viewed by other students or staff.

I am sharing this information because we understand that as parents or guardians, you may have concerns about today’s survey and discussion. Allow me to assure you that the only intent behind this topic of conversation was to connect students’ prior learning with future topics that may arise in the next learning module.

Please feel free to contact the Badger Middle School office at 262-335-5455 with any questions. Thank you for supporting our mission of preparing our students for college readiness and career success. Happy holidays.