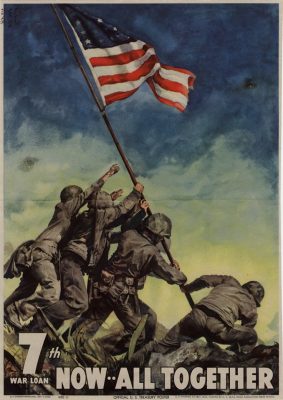 In November 2010 I was privileged to work as media on the Stars & Stripes Honor Flight. Below is the story I filed in my column Around the Bend.

There’s an entry in Facebook that reads; ‘A Veteran is someone who at one point in their life wrote a blank check payable to the United States of America for an amount up to, and including, their life. That is beyond honor, and there are way too many people in this country who no longer remember that fact.’

“I couldn’t get over all that had taken place,” she said.

The plane landed at Dulles International Airport in D.C. with a water-cannon salute by the local fire department. There were also more than a dozen local high school cheerleaders standing on the tarmac in 50-degree weather, waving pom poms and adding an Ooh-RAH-RAH to the veteran’s arrival.

Eight charter buses were led out of the airport by a police escort. Sirens blaring – police didn’t just stop traffic, they parted it like Moses and the sea.

Slicing through gridlock along the Interstate deputies took a no-nonsense approach to their assignment, pushing free-spirit motorists on to the shoulder.

At the World War II Memorial strangers, adults, and children stopped veterans and offered thanks.

“Thank you for your service,” said Sean Priest, 10, and his brother Hunter, 14, of Denton, Maryland. The pair held homemade signs and offered handshakes of admiration.

Veterans wheeled to the entrance of the memorial struggled to stand and walk under their own volition. It was a Benjamin-Button transformation.

“Their pride won’t let them sit,” said John Liszewski of D.C., offering a rigid snap salute to veterans who passed.

The WWII Memorial was dedicated May 29, 2004. Many from the Honor Flight slowly walked past the Freedom Wall’s 4,000 gold stars and the wreaths of oak and wheat on pillars symbolizing the nation’s strength.

An impromptu appearance by three USO girls drew veterans like a magnet; it was a care package from heaven, as the girls sang and posed for photos.

One vet in a wheelchair received a huge kiss on the forehead, he wryly told the crowd he “needed more oxygen.”

Guardian Gary Soike of Erin was impressed with the spit-and-polish performance of the changing of the guard at the Tomb of the Unknown Soldier.

The ceremony took place about 2:30 p.m. Central Standard Time. Within a half hour, Soike’s Germantown Warhawks would kickoff in a WIAA Level 1 quarterfinal football game against defending state champ Marquette.

“I made this commitment to the Honor Flight months ago,” said Soike, an offensive line coach. “I had no idea we’d get this far in the playoffs. I feel honored to do this.”

Veterans wanted for nothing as the Stars & Stripes team catered to their every need.

Stephanie Schmidt of West Bend was guardian to her grandfather, Steven Picciolo of Milwaukee.

“Grandpa, you’ll have to carry something because I can’t fit anything else,” said Schmidt, cramming a paper-bag lunch into her backpack.

“He’s from the era where you don’t waste anything,” said Schmidt. “I still have this morning’s muffin in the bottom of the bag.”

The volunteers that run the Stars & Stripes Honor Flights have grabbed the torch of responsibility with gusto, combining their enthusiasm with respect and incredible organization in a day focused on detail – group photos, historical updates on the bus between stops, welcoming cheerleaders on the tarmac, 18 young violinists at the departure gate, and even an old-school mail call on the flight home.

Manila envelopes were distributed to every veteran filled with heartfelt letters of thanks from family, friends, children, and grandchildren back home.

“My brother Keith in Arizona sent me a note that resembled V- Mail,” said Nancy Shaw about the letter printed in bright red type. “He even had the stamp, just like the original.”

Veteran Jim Schaller was impressed with the little things. “The plane ride was so smooth and my daughter pushed me around in the wheelchair,” he said.

Schaller, 86, of West Bend, served as a prisoner-of-war guard in Milwaukee at a base on 43rd Street. He entered the service in 1943 when he was 22 years old.

At Mitchell International, the Stars & Stripes tour ramped it up in style with music from a 10-piece bagpipe band and a color-guard escort to the concourse, where thousands packed Mitchell at midnight – offering a hero’s welcome with balloons, flags, cheers, applause, and heart-felt handshakes.

“I didn’t have a welcome home when I left the service,” said Ralph Smith of West Bend.

“I felt kind of important… more than I already am.”

Smith enlisted in the service in Nov. 1942 when he was 20 years old. He served as a Sergeant gunner aboard B-29s in the Army Air Force.

Brad Hoeft is on the board of the Stars & Stripes committee. “Thousands of WWII veterans are lost every week,” he said. “Our time to do justice to our veterans is running out.”

– The lunch break listed on the itinerary coincided with the day’s oxygen tank exchange.

– Honor Flights are run by volunteers and funded completely by donation, which can be mailed to: STARS AND STRIPES HONOR FLIGHT PO BOX 636 PORT WASHINGTON, WI, 53074 Donations are tax deductible and you will receive a thank you letter confirming your donation for tax purposes.