Home  »  Uncategorized   »   Remembering the Westphal Building fire on Dec. 20, 1950 in downtown West Bend. Hymnals and furnishings owned by the mission were destroyed and two accordions were also reportedly lost. 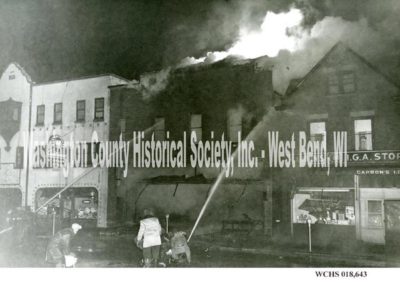 Dec. 20, 2016 – West Bend, WI – On Wednesday, Dec. 20 in 1950, tragedy struck when the Westphal Building in downtown West Bend caught on fire at 1 a.m. The photo and write up is courtesy the History of Washington County.


Volunteer firefighters managed to get the fire under control, but the fire all but destroyed the building, leaving the remnants of the structure behind.

During the bitterly cold night, the inhabitants of West Bend came together in a time of trouble, and that’s something to celebrate and remember.


With less than a week left before Christmas there’s a lot of hustle on the streets of West Bend.

Back 66 years ago there was a devastating fire that raced through several businesses on the north end of Main Street bringing the holiday spirit to a halt.

Heather Przybylski, Research supervisor at the Washington County Historical Society, pulls up records that indicate the fire broke out at 1 a.m. on a bitterly cold morning Wednesday, Dec. 20, 1950.

Gene Wendelborn was in his 20s and living in a downstairs apartment with his family, two doors from the building that caught fire. “I came home from bowling and was working on a train set for the kids and the wife smelled smoke,” said Wendelborn.  “I went outside to take a look and I could see the fire reflected in the windows across the street at the Washington House.”

The fire was at Kohl’s Hobby Center and Katzenberger’s Paint & Gift Store.

“I had just stepped aside and the whole front window blew out and across the street,” said Wendelborn. “It wasn’t so much the explosion but the fire itself  was loud.”

Wendelborn said the materials in Kohl’s Hobby Shop were extremely flammable and when the fire climbed the wall and spread to the paint store it became a very volatile situation.

The article in the paper read, “The Barton fire department was summoned to help the local volunteers battle the blaze. Two alarms were sounded in both communities.”

“I was 33 years old and I sat in my bedroom window and I could see the fire because we lived across the street right behind the Mermac Hotel,” said Peterson.

Wendelborn said his wife went next door and helped Harvey Gibson and his family out of their apartment, located just above the IGA grocery.

“I remember Smokey Weinert came and asked if everybody was out and then I said ‘old’ Jay Averill was still in his back apartment and his daughter was working the late shift.”

Wendelborn and Weinert broke the door down in the back apartment and found Averill fast asleep.

“Smokey got him up and got him dressed and we took him across the street to the Mermac Hotel and then a bunch of fellas got together because the police decided we should get the trucks out of the way,” said Wendelborn. “I just remember my fingers were frozen to the back of Ardnt’s truck.”

Christensen and Ardnt was a home-improvement business located in the basement of the burning building.

The above photo by Leif Eriksen shows the fire climbed to the second story of the building.

The newspaper story indicated a dance studio, accordion studio and the Lutheran mission of West Bend were all on the second floor of the building.

“Dance instructors Carolyn Diehl and Carol Jean Olson reported the loss of a piano, scores of classical and modern phonograph records, sheet music and dancing shoes. Hymnals and furnishings owned by the mission were destroyed and two accordions were also reportedly lost.”

“It was bitter, bitter cold and the next morning we went out there and it was just sheets of ice all over,” said Peterson.

The article stated,  “During the fire, the slippery footing hampered firemen to some extent, and scores of persons found walking precarious near the scene.”

The destroyed building was owned by Louis Westphal; he purchased it in 1919 and previously used it as a furniture store and funeral parlor.

The paper said the “blaze was brought under control sometime after 3 a.m. The interior was a mass of blackened rubble, with portions of the roof hanging precariously from the southern wall and the cause of the conflagration remained undetermined.”