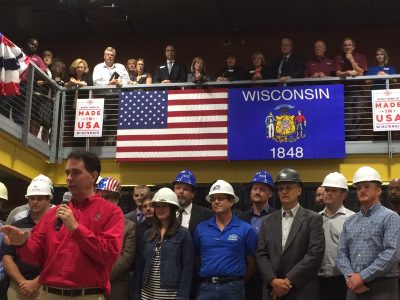 This project will generate a projected $10 billion in capital investment and a possible ripple effect from partnerships and secondary economic growth that could reach over $78 billion in gross domestic product over the 15-year term of the deal.

Foxconn plans to create up to 13,000 jobs and in doing so will have the opportunity to earn nearly $3 billion in tax credits.

Annual payroll at Foxconn will surpass $700 million once fully operational. Beyond Foxconn’s direct investment, an additional 22 thousand indirect or induced jobs are estimated to be created due the sheer size of this historic project.

Rep. Jesse Kremer issued the following statement after the signing, “It is an honor to join Governor Walker here today as we turn a new page in our state’s economy and witness a regional transformation in ‘Wisconn Valley.’ We are taking a historic step on the path towards an entirely new industry and manufacturing campus, the sheer scale of which has not been seen anywhere in North America, right here in Wisconsin. I was proud to stand with Governor Walker today as the voice of the 59th Assembly District. This Republican-led legislature is doing precisely what we were sent to Madison to accomplish – and we have lived up to those expectations. With new manufacturing, new tech, and new family supporting careers, it truly is a great day to live in Wisconsin.”

The Foxconn tax credits are linked to actual performance and include claw-back provisions should jobs and investments not be kept in our state. Please note that, despite inaccurate claims to the contrary, all air and water quality standards still continue to apply, including those of the federal government. The Department of Natural Resources must ensure that the conditions of applicable permits, licenses, and approvals under the state’s jurisdiction are met for all activities related to Foxconn’s development and ongoing operation.

Rep. Kremer represents the 59th Assembly District which includes Southern Calumet, Western Sheboygan, Northern Washington and Eastern Fond du Lac Counties. Rep. Kremer’s office will continue to be located at 17 West in the Wisconsin State Capitol, and he can be reached at (608) 266-9175 or by e-mail at [email protected]. His legislative website can be found at www.RepKremer.com.