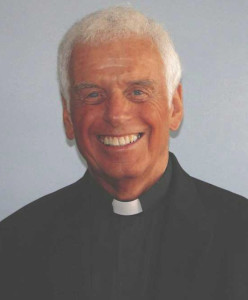 Rev. Gerald Brittain made clear he did not say the word, ‘retirement.’

“What I said was there would be a new pastor for the parish and that will happen June 21,” he said. “I intend to continue to do something because if I sat and did nothing I’d go crazy.”

During Mass on Sunday Rev. Brittain shared the news with parishioners. He has been at the parish on Eighth Avenue since taking over for Rev. Jerome Rinzel who served from 1983 – 1995.

Others who have served with Rev. Brittain include Rev. Jerry Repenshek and Rev. Rick Wendell.

“I’ve been here 21 years,” said Brittain. “The assignment I had was for 12 years but since I played the system I got an extra nine.”

Brittain was notified by the Archdiocese that his assignment would be ending and a new pastor would replace him.

“I can’t be appointed a permanent pastor or associate because I’m beyond the age,” said Brittain.

A youthful 79, he said he can be appointed a temporary associate or retire.

Using a sports analogy, Brittain said he could become a free agent.  “That’s not really clear at this point but I know I’m still here for five months and I intend to enjoy the five months.”

Retirement age in the Archdioceses is 68. At 75 a priest can’t be assigned because the diocese can’t give a term of office. “I asked each year for a temporary assignment and that was given the last nine years,” Brittain said.

Reflecting on his career at Holy Angels, Rev. Brittain said he was focused on pastoral work. “Developing a staff and working with people to develop relationships,” he said.

As far as the school is concerned, Rev. Brittain said it is on solid footing despite some of the changes going on in the community. “We have no debt,” he said. “We right-sized the school and it’s stable now. The incoming pastor, I’m sure will be aware of what’s going on and he will continue to do the work of the parish.”

Members of the parish council have solid praise for Rev. Brittain.

“The stability he’s provided for both the church and the school has been very good,” said Brian Glaszcz, a member of the parish council.  “He’s done a good job positioning Holy Angels and we’re in a good place going forward.”

John Butschlick is a trustee with the parish. “Rev. Jerry has the option to retire but he said he hasn’t made a decision yet, ” said Butschlick. “On June 21, that will be his last day according to the Archdiocese.”

Rev. Brittain has been much loved at Holy Angels. He has an easy-going demeanor and he’s kept parishioners up to speed with his popular weekly column in the church bulletin, ‘From the Desk of Father Jerry.’  The updates have a very homey feel as Rev. Brittain uses a conversational style to write about current notices, reflection and sometimes there’s a tidbit on basketball.

Rev. Brittain can regularly be found shooting hoops in the school gym or lacing up his sneakers around noon at the Kettle Moraine YMCA.

Negotiations will begin and next month, there will be a hearing with staff and the parish council and the first week in May announcements of various appointments will be released.

Find all your local news – 7 days a week at http://www.washingtoncountyinsider.com

WashingtonCountyInsider. com by Judy Steffes, a reporter who has lived in the community 30+ years.