Home
»
Event
»
Ride of Silence is tonight, May 15 in West Bend

May 15, 2019 – West Bend, WI – The annual Ride of Silence is tonight, Wednesday, May 15 starting in the parking lot just south of the Museum of Wisconsin Art. The ride will start at 7 p.m.

The history behind the ride dates to 2003 when Chris Phelan organized the first Ride of Silence in Dallas after endurance cyclist Larry Schwartz was hit by the mirror of a passing bus and killed.

“It’s a good way to spread the message that bicyclists and motorists should share the road and keep an eye out for each other.” 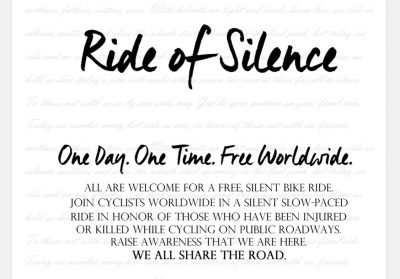