April 5, 2020 – West Bend, WI – There is a line on the City of West Bend Wikipedia page that “The strong economy in West Bend in the 1930s led Ripley’s Believe it or Not to claim that West Bend was the only city in the United States that did not enter the Great Depression.” 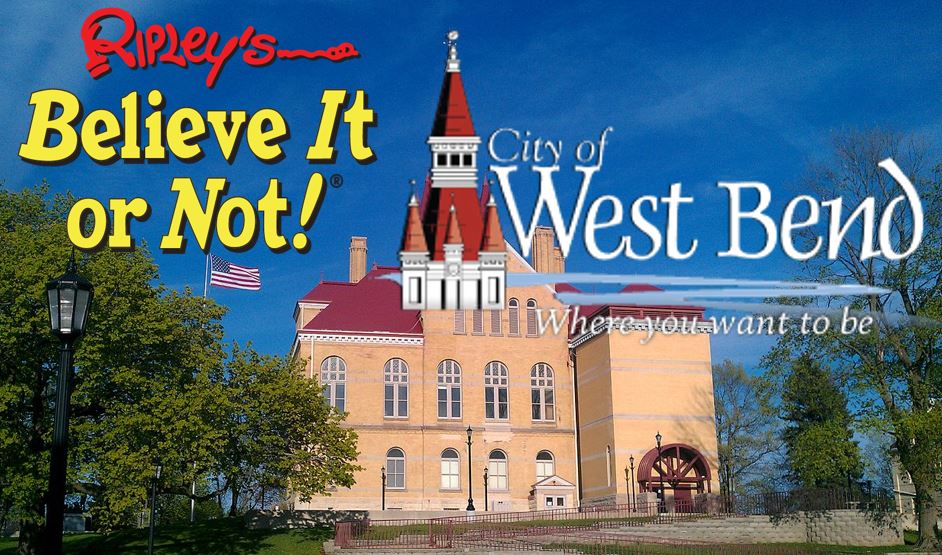 Prior to that statement the text talks about the thriving industry in West Bend.

Allan Kieckhafer was born in 1923. He was 6 years old when the Great Depression hit.  “I don’t remember much of anything but I do remember every time we left the room, we turned the lights out to save electricity,” said Kieckhafer.

“I do know the West Bend Company was not doing well in the 1930s and they got into the copper dishware during the Depression and they kept going because of that new line,” he said.

Kieckhafer, 96, remembered bowls and trays and beer mugs; a variety of copper items. “It was a way the company could diversify because everything else they had was made of aluminum,” he said. 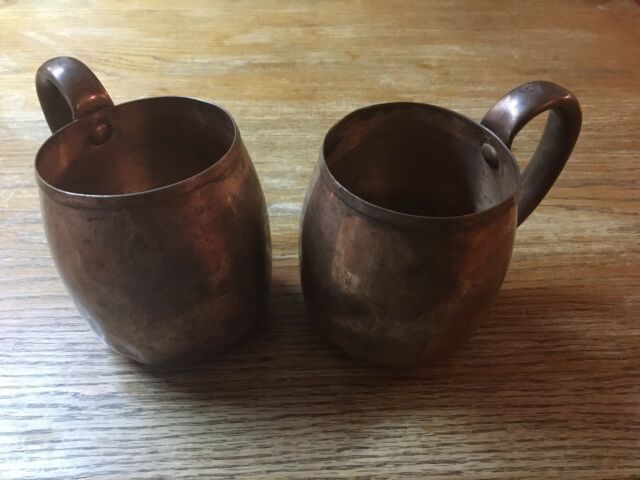 The West Bend Aluminum Company was founded in 1911, and production of copper steins in 1932 boosted the company when aluminum was on reserve for war efforts. On that light note, celebrate the summer in style by sipping your Pacific Northwest IPA or a Moscow Mule out of a piece of true Americana. Measures 3 1/2″ tall and is 3″ in diameter. Made in West Bend, Wisconsin!

Bink Steinbach of West Bend said he believes the “Ripley” statement was true. 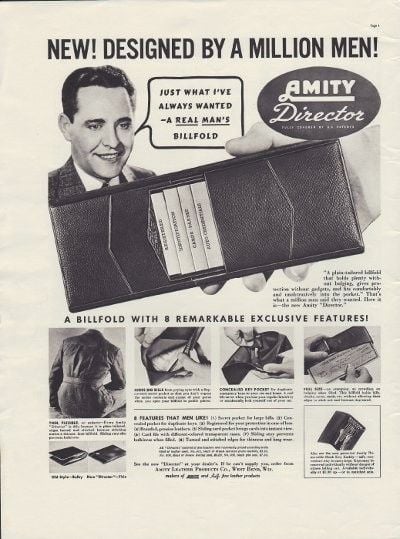 “It wasn’t frivolous products being manufactured in West Bend,” said Steinbach. “We had Gehl Co, Amity Leather, Enger Kress and West Bend Company. Those companies were all run very strict with a conservative German mentality. There was a very disciplined management style in those companies.”

Pick Hway said the Depression impacted supply and demand and the economy.

“It would have impacted manufacturing to some degree, but I think prior to the Great Depression there were many companies that had already made, relatively speaking, significant wealth and it probably helped tide them over,” she said.

“I think people in West Bend, but probably not all people, did relatively well,” she said. “I also don’t know how tied people were into the Stock Market. As Bink said, this is a relatively conservative community.”

“The community had a good, solid base of wealth and manufacturing. All of those manufactures mentioned, as they did well so did their workers. So, it did pass down the chain,” she said.

On the second floor of City Hall there is a framed section of the Milwaukee Sentinel newspaper dated Sunday, October 11, 1953. The article highlights the City of West Bend and focuses on what makes it the “City of Varied Industries.” 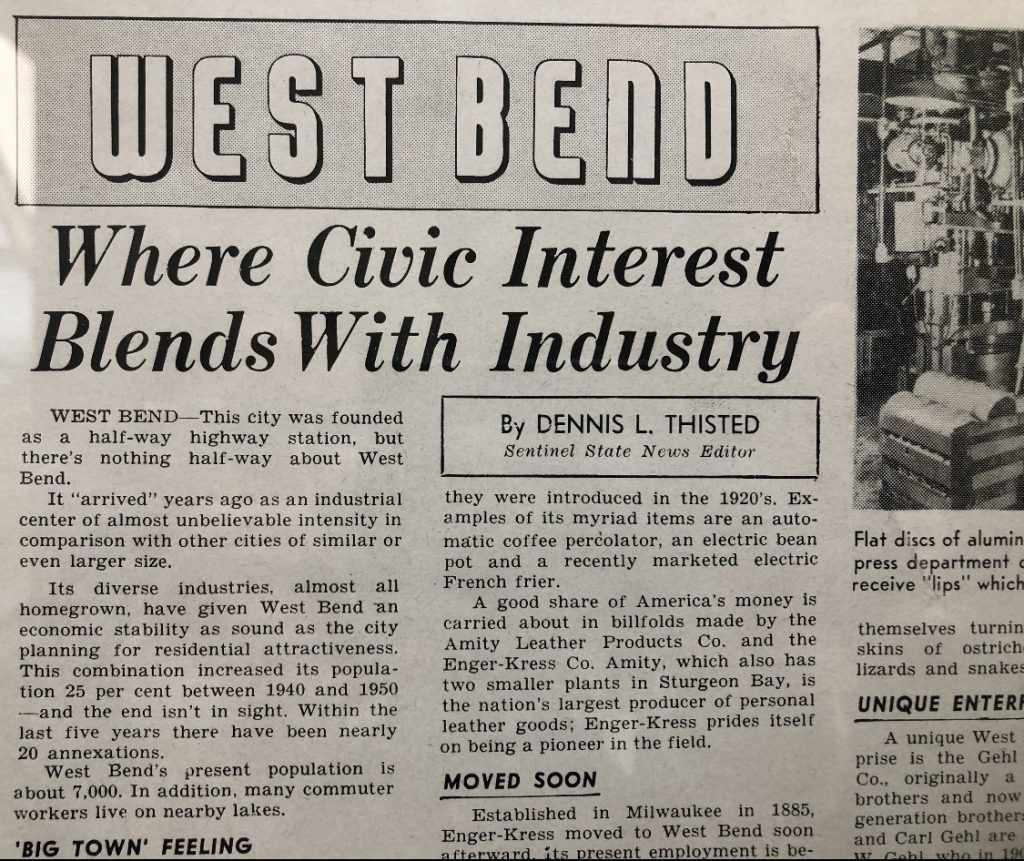 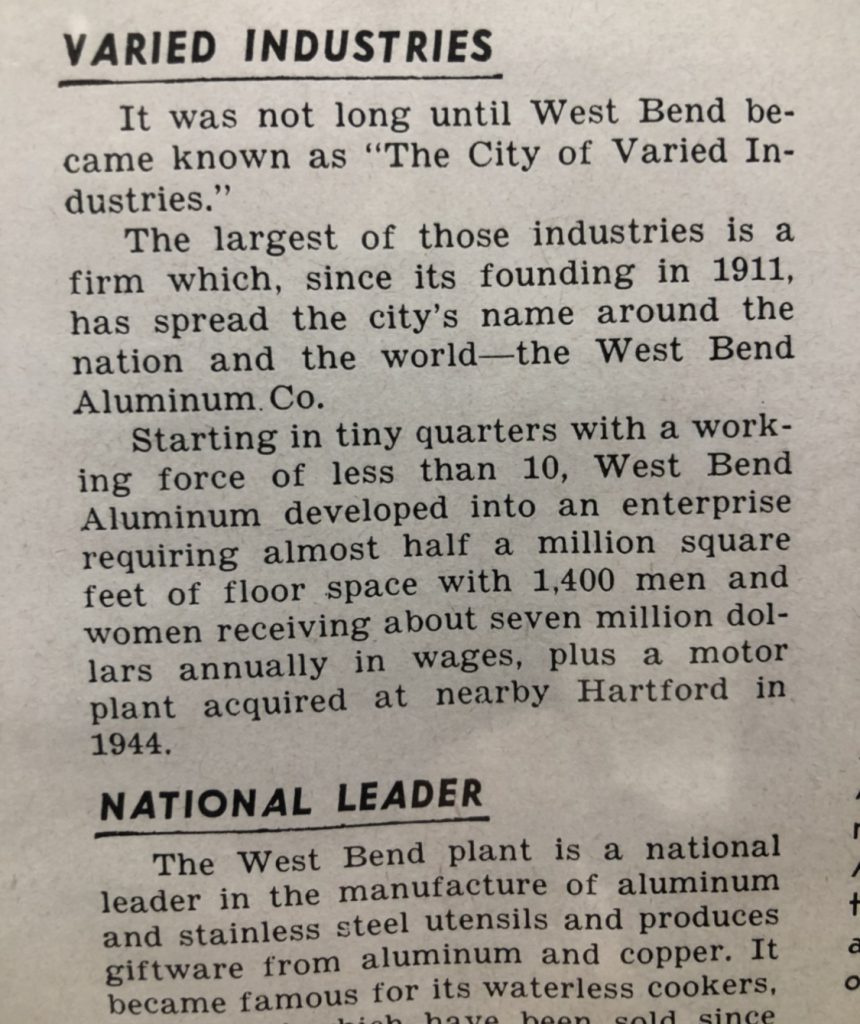 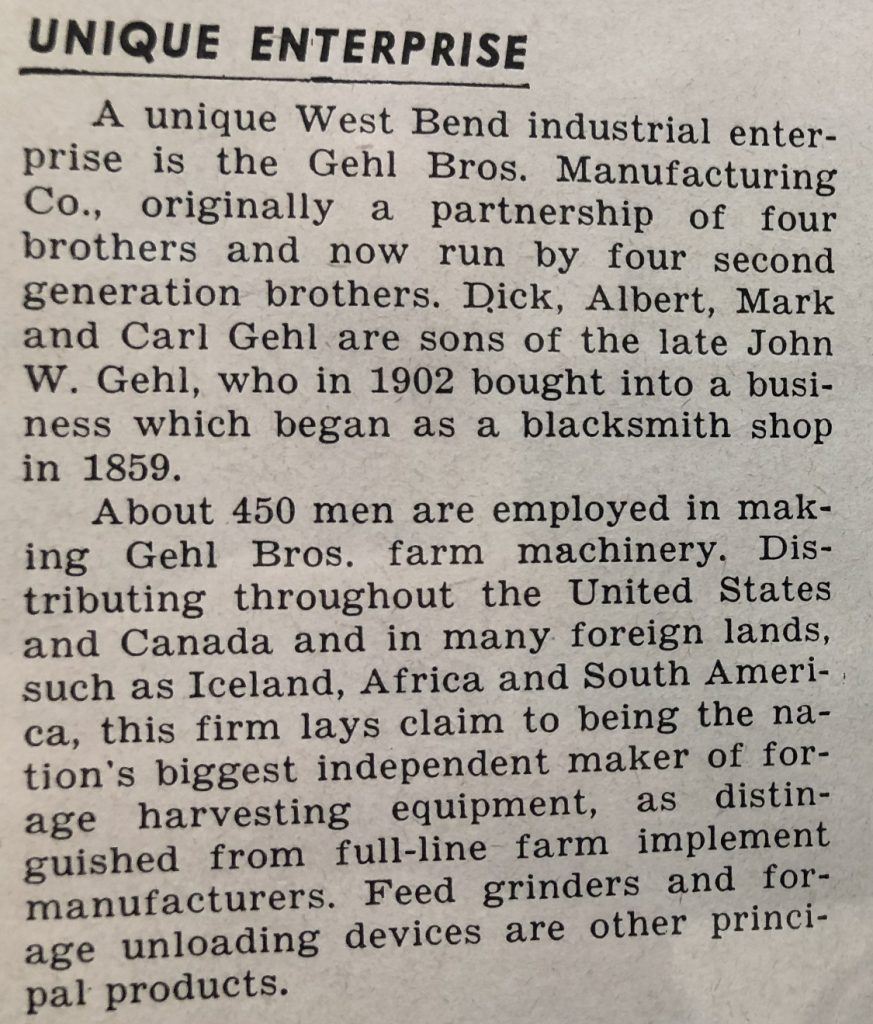 “I don’t know the degree to which farming played a factor but certainly for the size of community it had a higher percentage of hard goods and solid manufacturing than the average small community of its size,” said Pick Hway.

Noting the success of the manufacturing, Pick Hway said the wealth in West Bend was not based upon ticker tape. “It wasn’t built on buy low, sell high; it was built on hard work and products that were being built and sold. Which is a little bit different than the financial centers back then (during the Depression) which would have been harder hit,” she said.

“Probably the businesses (Gehl, Amity, Enger Kress, West Bend Aluminum) weren’t as highly leveraged as people in the market, which is one way to look at it.  It was a combination of things,” said Pick Hway. 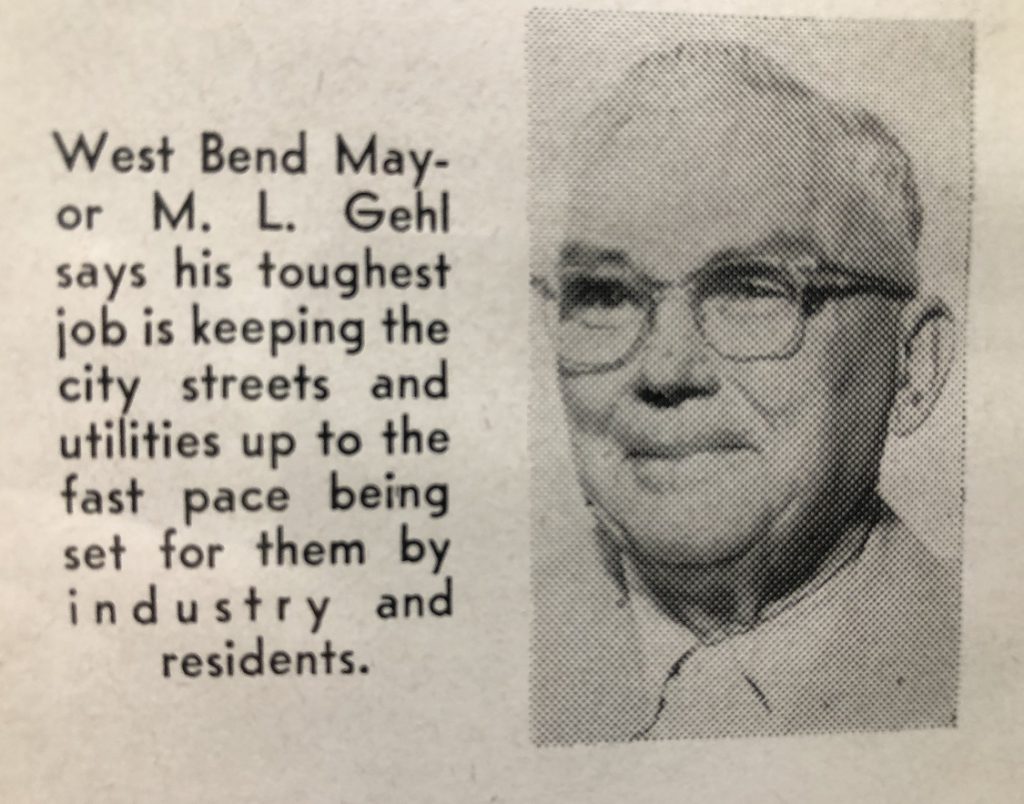 Former West Bend Mayor Kraig Sadownikow is well aware of the city’s history in manufacturing. With regard to the current critical economic and worldly situation, it will be interesting to see how the community responds.

If the past predicts at least some of what the future will be, I’m glad my kids, family and I are in West Bend.  Our history overflows with stories of strength, resilience, creativity and the ability to thrive when every indicator points toward demise.  In addition to being the City that never felt the Great Depression, we are also the City of Varied Industry, we survived a tornado, we fought the downtown fire that spawned West Bend Mutual and we re-tooled West Bend Company in WWII to make ammunition.  We are builders, manufacturers, service providers, first responders, educators, risk takers and entrepreneurs.

We have the incredible habit of standing up for each other and stepping up to the plate when our community is in need.  We don’t look to the mysterious “THEY” to do it.  We realize “THEY” is actually “WE.”

We band together and do it ourselves.  We don’t have to look to the distant past for examples, West Bend is living it right now.  In the last 10 years, together, we have virtually re-built our entire downtown.  The East Side river revitalization is beautiful, once a joke the Old Settler’s Park is now a proud monument, what was a storm water drain is now Pocket Park and a new bridge connects East and West, MOWA is a national treasure and the Theatre will prove to be an example for others to follow.  Everyone of these successes is an example of our local government and our citizens working together.

That’s what it will take over the next few weeks.  Citizens, local government and service providers working together.  As citizens we have it pretty easy.  Wash our hands, keep our group gatherings small, buy our food local and basically be smart in times of uncertainty.  Having a bigger challenge are our first responders, public works teams and, of course, our health care workers.  Let them do the jobs they do so well.  While we hunker down and keep our families safe inside our homes, they are keeping the City operating and protecting us from the outside.

Moving forward, Pick Hway advised people start adding things to their calendar rather than taking them off. “Put it on the calendar, the date may change but put it on your calendar it will give you something to look forward to,” she said. 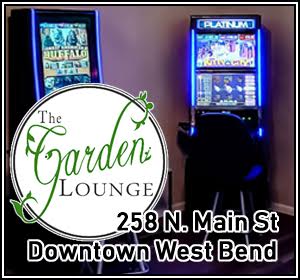