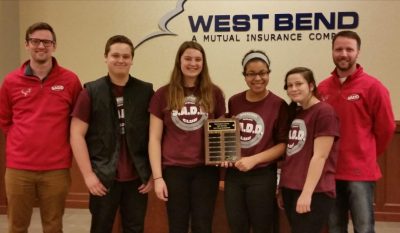 April 12, 2017 – Washington Co., WI – During the 2016-2017 school year, Washington County High School students were working hard on an anti-drug campaign. The culmination of their hard work came together on April 6, when students from four high schools gathered at the West Bend Mutual Prairie Center to present their slogans and anti-drug ideas. 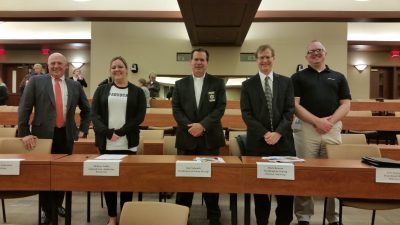 Each school had well thought out slogans.  Their dedication and hard work was very apparent as evidenced by the extensive work and effort put into their projects.

The judges had a tough job but after careful consideration chose Slinger High School as this year’s winner.

The slogan “T.R.U.T.H.S.” was the brainchild of the Slinger S.A.D.D.  (Students Against Destructive Decisions) and focused on the “SADD TRUTHS” about drugs.

Slinger Students were awarded a traveling trophy / plaque to proudly display at their school. 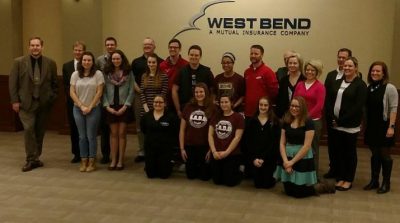 This year’s competition was the first phase of the project.

The “T.R.U.T.H.S.” theme will serve as the foundation of future anti-drug projects and is intended to create a united front by all of the schools in the county to reduce youth drug and alcohol abuse on a larger scale.

Moving forward, students at the individual schools will work on a large-scale project targeted at a specific drug.

For the 2017 – 2018 school year the targeted anti-drug project will be an anti-opiates campaign. In the spring of 2018 the participating schools will once again come together and compete by presenting their anti-opiates project to a panel of judges.

The winner of that competition will be awarded the traveling trophy and a new targeted drug project will be assigned for the 2018-2019 school year.