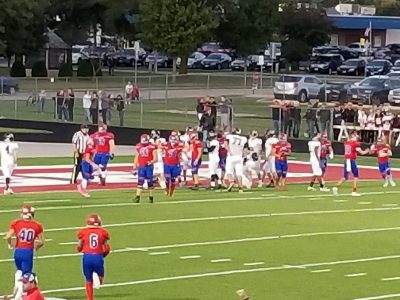 Sept. 16, 2017 – Slinger, WI – The Slinger Owls and West Bend East Suns football teams faced off this week with the Owls winning 2 out of 3 games.

On Thursday, West Bend East JV2 [formerly known as the freshman] team traveled to Slinger to play a very tough game with Slinger.  The JV2 Suns came out ahead with a score of 27 to 15 over the Owls.

In West Bend the Slinger Owls JV team came out on 35 to 7 over West Bend East.

Friday night the Suns honored local veterans with Military Appreciation Night.  The event started with each of the football players accompanying a veteran at introductions along with an U.S. Marine Corps Honor Guard.  At halftime, American Legion District 2 “Legion Riders” circled the track on motorcycles to pay tribute.

Two minutes into the game the Suns Kyle Yochem scored a touchdown; the Point After Try [PAT] by Caleb Knoll was successful.  With a 1:09 remaining in the first quarter, Knoll kicked a 43-yard field goal.  At the end of the first quarter the score was West Bend East leading Slinger,  10 -0.

The second quarter was lead off with another field goal by Knoll from the 39-yard line. Slinger finally got on the board with a Jason Klink 1-yard run for a touchdown followed by Devon Mason making a PAT.  However, the Suns were not done scoring, with 36 seconds remaining in the half, Yochem ran 1 yard for a touchdown and Knoll’s steady foot sunk another PAT.  The score at the half looked dismal for the Owls with West Bend East leading Slinger 20 – 7.

Apparently there was a very motivation discussion in the Slinger locker room at halftime.  To some fans it appeared a “new” team on the field.  Slinger’s defense stepped up to be more decisive in their approached and held the Suns scoreless the entire half.

Jason Klink had a yard run near the end of the third quarter for a touchdown and Mason had another effective PAT bringing the score to Slinger at 21 and East at 20.

Slinger’s quarterback, Tyler Evans had some awesome runs to move the ball down the field.  With a little more than 4 minutes left in the game, Slinger made a decisive score with Klink’s 4-yard scamper for a touchdown and the point after by Devon Mason was good for a final Score of Slinger 28 and West Bend East 20.

Next week the Owls will travel to Port Washington as the Suns will meet up with the Whitefish Bay Blue Dukes in Whitefish Bay.