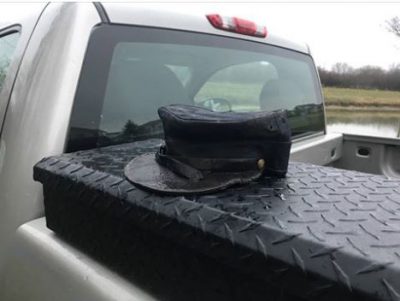 Nov. 15, 2017 – Hartford, WI – On Wednesday, Nov. 15, 2017, at approximately 12:15 p.m., Marshal Leonard Scherger’s stolen hat was recovered from the bottom of the retention pond where the suspect reportedly discarded it. Hartford’s Wastewater Treatment department facilitated its recovery by pumping out the majority of the 500,000 gallons of water in the retention pond. This task took over nine hours to complete.

The Director of the Wastewater Treatment Department, Dave Piquett, was the first to spot the hat. He saw what he initially thought was a plastic bag in the water about 15 yards south of the area where the suspect claimed to have thrown it into the pond.

Upon closer inspection, he realized it was the stolen hat. The hat was covered with a thin layer of the clay that was used to line the bottom of the retention pond when it was constructed. This clay coverage most likely made it undetectable for the divers attempting to recover it from the pond last week.

Officers took custody of the hat and immediately took it in for professional drying and cleaning. This process could take several weeks. The hats golden metal “POLICE” pin was not recovered, but efforts are underway to have a duplicate fabricated. The hat was badly soaked, but the cloth material and the leather bill were completely intact. We are hopeful that it can be fully restored.

Restitution will be sought from the suspect for all of the expenses incurred for the services of the Washington County Dive Team, the draining of the retention pond, and the ongoing professional restoration efforts being performed on the 114-year-old fallen hero’s hat.

The Hartford Police Department would like to thank our community for coming together to help us resolve this matter.