January 30, 2021 – Hartford, WI – This game was full of a lot of fast-paced action from the opening tip-off, that was ultimately decided by one team’s ability to make more three-point shots and stop their opponents defensively in key moments. The Spartans roared off to an early advantage with help of the aforementioned three-point shooting, but never gained a truly insurmountable lead as the Orioles were able to keep any Spartan advantage in the single digits. A relatively clean first half from the Orioles (only one team foul versus the Spartans’ five) kept them within striking distance heading into halftime, only trailing 32-29. The second half carried much of the same intensity, which in turn led to team defense and the free-throw line being major difference makers. The Spartans were able to force just a handful more turnovers than the Orioles and also outshot them at the free-throw line, going 15-21 versus the Orioles who were 9-13. Despite a spirited last-second rally by Hartford, the Spartans held on to win 61-59. 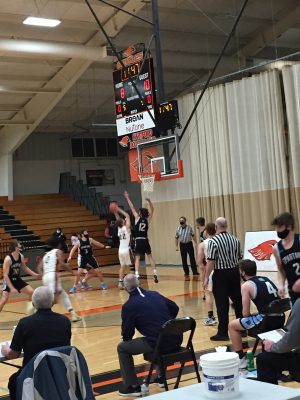 The Spartans were led by a trio of players: senior Curtis Holbrook with 18 points., senior Aaron Tennies with 14 points and junior Jayden Omernick also with 14 points.

The Spartans will return home for a North Shore Conference game against Port Washington on Tuesday, February 2, at 7:15 p.m. The Orioles are also slated to play their next game away against Cedarburg on Tuesday at 7:15 p.m.

Previous articleVIDEO | Thanks for supporting senior meals at The Precinct in Germantown
Next articleOlympic champion, Brianna Decker, to appear at Kettle Moraine Ice Center