A Washington County Sheriff’s Deputy arrived in the area and located two men. One of the men provided law enforcement false identifying information. Deputies were able to figure out his proper identity and learned he had an active warrant out for his arrest as well as the fact he was on probation in the State of Wisconsin for a prior felony drug conviction. 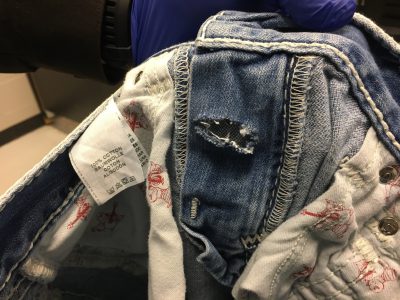 Upon arrival at the jail, he was searched again and placed in a holding cell until he could be formally booked. An attentive corrections officer noticed the suspect was lying in the cell covered with a jail blanket. He entered the cell to investigate and observed a white powder on the blanket as well as on the suspects face near his nose.

A clear plastic with Fentanyl fell out of the blanket. The cell was immediately isolated to prevent the further spread of the deadly substance.

An in-depth search of his jeans revealed he had a small secret compartment on the inside of his jeans near the zipper which he had made in order to conceal illegal drugs.

West Bend paramedics transported the suspect to the hospital where he was treated and released back to the jail to face his charges. Washington County Sheriff Martin Schulteis commented on the challenge his staff faces each day on the streets and in the jail and reiterated his agencies committed to providing a safe and secure community throughout all of Washington County.

“Fentanyl is a substance that threatens us all within this community,” said Schulteis. “It does not matter if you knowingly ingest it or accidentally come into contact with it. Exposure to Fentanyl frequently results in death. This case provided another example of the steps criminals will take to try and conceal dangerous substances from law enforcement. Our corrections staff works hard every day to try and keep these substances out of our facility. In this case, they unknowingly exposed themselves to this deadly substance while they were making sure the inmate was okay. I am grateful for my staff that diligently pursues those that choose to use and sell Fentanyl and other deadly substances within Washington County and my promise to the community is we will continue to fight hard every day to keep Washington County a safe and secure community.”