Home  »  Uncategorized   »   Town of West Bend chairman calling it a career. “I enjoyed it for a time but a lot of my ideas have gotten worn out and it’s time for new blood.” 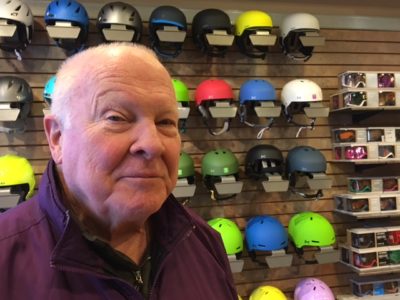 Dec. 22, 2016 – Town of West Bend, WI – Paul Rice was picking up some downhill skis and boots at Mountain Outfitters on Wednesday when he made his official announcement.

“I am absolutely not running,” said Rice. “I’m finally through.”

For the past 20 years Rice has held the post of chairman in the Town of West Bend.

“I gave it to Town Clerk Rebecca Schuster and told her to hang onto it… just in case I changed my mind,” he said.

Rice actually signed the paperwork a couple weeks ago.

“I enjoyed it for a time but a lot of my ideas have gotten tired and worn out and it’s time for new blood.

“I love the people that work there,” he said. “The clerk is wonderful, the treasurer is wonderful and the guys at public works are terrific.  A lot of people think I’m too easy on them but that’s not it – if you have people working for you that constantly give you 120 percent you treat them like gold.”

The town was incorporated by act of the Legislature, as has been stated, January 21, 1846, which was soon after the earliest settlers began to come in. The first town meeting was held at the house of Isaac Verbeck, the only precinct designated in the act of incorporation for the town which embraced at that time what is now comprised in the towns of West Bend, Barton, Kewaskum, Farmington and Trenton. It was held April 7, 1846. For several years the records were kept on loose sheets and stored away in a bag. The bag was lost, and the particulars of this first town meeting are gathered from the recollections of old settlers still living who were present at the meeting. Jacob E. Young’s account is substantially as follows:

“We had trouble about that first town meeting. We had to organize from the stump, and how we were to manage was the question. We had no officer, no authority to put the machine in motion. I had been in the same fire in 1838 at Two Rivers. There was elected a Board of Inspectors, Judges of Election and a Clerk. Having no officer to swear the Board and Clerk, I suggested that one of us swear the Clerk, and the Clerk could then swear the Inspectors and others. I therefore administered the oath to Joseph H. Verbeck as Clerk, who, in turn, swore the Inspectors, and then we were in running order. I was elected Justice of the Peace, and there were three others elected (whose names I do not remember), and three Highway Commissioners. They were Joseph H. Verbeck, Nelson Rusco and myself. Verbeck was elected Clerk and Farmer was Treasurer. Barton Salisbury, and, I think, Charles Higgins, ran for Chairman of Board of Supervisors, Salisbury being elected. I think Ben Thompson and some one else ran for Supervisors, and each had the same number of votes. It is said that Verbeck’s coffeepot was the ballot box. I think, however, an old candle-box was used for the purpose. I think there could not have been more than forty voters.

Walter Demmon says: “A town meeting was held at the house of Isaac Verbeck, as had been ordered by the Legislature, when the town was set off and named in April, 1846. The four townships being represented at this precinct. I knew we had a difficulty to overcome—we had no time to swear in the officers. Jonathan Bailey, a Justice of the Peace from Mequon, was here on business, and I asked him to administer the oath, which he did. I ran for Chairman of the Board of Supervisors against Barton Salisbury. My opponent was elected, he having a majority of two votes. I think Jacob E. Young was elected Justice of the Peace, and Joseph Verbeck, Clerk. W. P Barnes, Mr. Waite and myself were elected Assessors. I do not remember names of other officers. We were all strangers. I think there were not more than thirty voters

These statements must be accepted as the record in the absence of a better one, and, although the witnesses differ on some minor and immaterial points, both are, in the main, correct.

Mr. Young evidently refers to swearing Inspectors of Election and then Clerk before voting commenced; Mr. Demmon to administering the oath to the officers elected.

Of course, no poll list of this first meeting is now in existence, but the list of votes polled at the ensuing fall election, held in November, 1846, is on file at the County Clerk’s office, and is as follows:

The above list comprised all who voted at the time within the limits of the four townships then embraced in the town of West Bend.

From the History of Washington and Ozaukee Counties, Western Historical Company, Chicago, November, 1881.