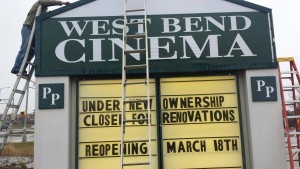 Friday will be the big unveil for the new West Bend Cinema, formerly the Paradise Theatre.

Boppa LLC, which owned the property, closed on the purchase of operations at the end of February and began a massive overhaul of the interior.

Local plumbers and cleaning crews were contracted and new reclining seats and concessions were ordered.

A sneak peek tour showed bathrooms have been upgraded and new carpet installed. The entire theatre has received a fresh coat of paint, new landscaping, and signs.

“Movies have been loaded with lots of great new releases and fresh concessions arrive Thursday.”

On Feb. 29, http://www.washingtoncountyinsider.com broke the story about some changes in store for the theatre on Parkway Drive in West Bend.