The victim called and reported that the suspect, who is a 32-year-old Hartford man was possibly under the influence of opiates and was last observed leaving the area in his car.  The caller reported there was an altercation at her apartment and that he had possibly damaged her car when he was leaving.

Deputies were dispatched to the area.  A short time later a deputy located the suspects’ car parked in the rear of the Maysteel Factory located at 6199 CTH W in the Town of Addison.  A handgun case was observed inside the car.  An employee had observed the suspect pull into the lot and observed that he ran into the second floor office area of the factory.

The employee confronted the suspect prior to him entering the building and asked him who he was looking for.  As a result of an unknown person entering the property Maysteel went into their lockdown/evacuation procedures.  The approximately 80 employees were evacuated to secure areas within the factory with law enforcement.

A perimeter was established and the employees evacuated to a safe area.  Law enforcement then conducted a search of the factory and office areas.  A search of the exterior of the plant was conducted by the Washington County Sheriff’s Office drone.

The Washington County Sheriff’s Office was assisted by the Wisconsin State Patrol, The City of West Bend Police Department and the Village of Germantown Police K9 unit.  The suspect was located hiding inside the factory with the assistance of the police K9.

The suspect surrendered without incident.  The investigation revealed that the gun case was empty and that the gun had been taken as evidence earlier in the year when the suspect was arrested on weapons charges in another county.

The suspect was arrested for Disorderly Conduct, Criminal Damage to Property, Bail Jumping and Criminal Trespass to Building.  The factory was shut down for approximately three hours during the search.

UPDATE:  Washington County Sheriff said there was an empty gun case in the man’s vehicle but the weapon belonged to a girlfriend and that weapon had been confiscated by police in another county some time ago.

Employees at Maysteel in Allenton, 6199 County Road W, were sent home early Thursday night after a man, possibly carrying a gun, was reportedly in the building.

According to witnesses it appears police were chasing a man when he got inside the Maysteel building  and ran to the business office.

A supervisor reportedly got on the PA and told all employees to immediately go to shipping and receiving. The staff stood there for two hours.

Early word is a police dog was brought in to find the man. 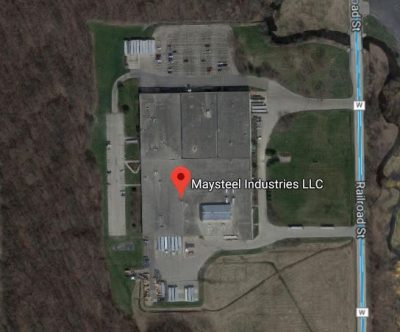 Eventually the subject was arrested and employees were sent home around 12:30 a.m.

Note: This is a developing story. Watch for more details shortly.