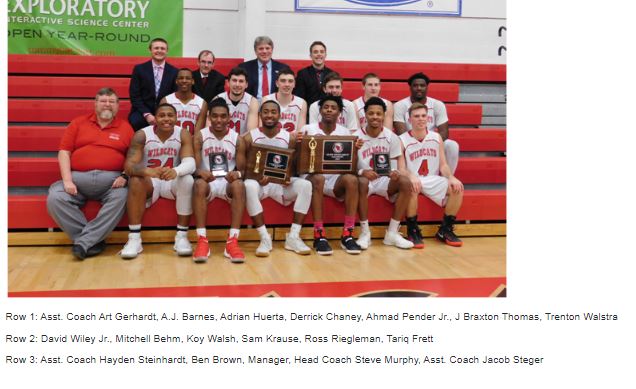 Feb. 27, 2018 – Washington Co., WI – In the semi-final game, the University of Wisconsin – Washington County Wildcats were up against a high-powered team from UW-Baraboo that featured a pair of 1st team all-conference players including the Western Division Player of the Year.

Having a full week to prepare for the game definitely helped as the Wildcats prevailed 91-79.  Though UW-WC was uncharacteristically cold from the outside, missing all 15 of their 3-point attempts in the game, the Wildcats were able to penetrate both the zone and man-to-man defenses of UW-Baraboo for baskets and fouls.  The switching up of their two full court zone presses created enough turnovers to result in some critical transition points that turned the game in UW-Washington’s favor.

Adrian Huerta led the Wildcats scoring attack with 23 points, including 11-12 on free throws.  He also led the team in steals with 4 and added 5 rebounds.  Though J. Braxton Thomas, who led the Wildcats in 3-pointers on the season, failed to connect on all 7 of his shots from distance, the freshman guard instead attacked the rim and scored on all 7 of his 2 point field goal attempts, plus a pair of free throws for 16 points.  Ahmad Pender, Jr. made 5 of his 6 shots in the paint and went 3-4 from the line to finish with 13 points.  Eastern Division Player of the Year, AJ Barnes, Jr. recorded another double-double with 10 points and 11 rebounds.  Derrick Chaney and David Wiley, Jr. each scored 8.  Koy Walsh hauled in 7 boards and scored 4 points.  Tariq Frett scored 5 points.  Trenton Walstra and Mitch Behm each added two points.

All 12 players saw action in the game, which helped keep everybody somewhat fresh for the next game only 14 hours later.  The rebounding category was won by the Wildcats, 39-32 in the game.  And the turnovers were UW-Baraboo 22, UW-Washington 17.  The Fighting Spirits actually attempted more shots in the game with 64 compared to 59 for the Wildcats.  However, the Wildcats owned the shooting percentage advantage in the game 53% to 45%.

As the Wildcats left the facility at 10:30PM, their focus was only on two things – getting some food, and getting ready for the championship game.  The next morning after breakfast, the team met for a strategy session, discussed the game plans, and watched the video of the other semi-final game from the previous day where UW-Sheboygan had defeated UW-Marathon 79-67.

Knowing that most of their home games are on cable TV and that every team in the conference has access to those game videos online to scout, and knowing that opponents scouted other games, too, the Wildcats team knew that they needed some new tweaks to the system for the weekend games.  As per their usual end of the season routine, the Wildcats practiced for only 1.5 hours instead of 2, but watched a lot of game video before and after practices.  The team prepared hard all week for these Final-Four games by trying to perfect their system, and by adding a few new offensive and defensive things in case they were able to advance to the championship game.

Facing UW-Sheboygan in the finals was not an easy task.  The Wombats had nearly defeated the Wildcats twice in the regular season, with the Wildcats winning each of the two games by the margin of only one single basket.

In the final championship game, UW-Sheboygan took an early lead, just as they had in the two previous meetings between the two teams during the regular season.  But instead of falling behind by 17 like they did in the first meeting between these teams, or falling behind by 9 like they did in the second meeting, the Wildcats kept the early deficit closer this time.  UW-Washington County actually surged ahead occasionally in this back and forth game.  Then the first of three game-changing turning points occurred.  It came in the closing possessions of the first half.  Responding to a UW-Sheboygan 3-pointer to tie the score at 27 all, J. Braxton Thomas drilled a three pointer, then the Wildcats added another basket to take a 32-27 lead into the locker room at half time.

The second turning point of the game came early in the second half when the Wildcats raised the lead to over 10 points in the first few minutes of the half, then bumped the lead to 20 points shortly after the 8-minute mark to play in the contest.

Generally a three-quarters court zone pressing team, UW-WC came out of the locker room running a high-pressure man-to-man full court scramble defense that they had developed during the week of practice leading up to the game.  The result was that it helped create 15 turnovers in the second half of the championship game.

Knowing that they were no match for UW-Sheboygan’s superior size, with the three talented 6-8, 6-8, and 6-9 post players that rotate into the Wombats lineup, and also knowing that the Wombats had very talented guards, the Wildcats decided to try to outnumber the guards, pressing 4 on 3.  The Wildcats kept a safetyman back to slow the break until teammates could get back if the ball was advanced quickly up the court.

The third turning point in the game was that the Wombats shooting percentage prevented UW-Sheboygan from mounting any long scoring runs.  For the game, the Wombats connected on 17-60 shots from the floor for 28%, while the Wildcats made 30 of 63 shots for 48%.  UW-Sheboygan did win the free throws category shooting 65% to only 50% for the Wildcats.

Unlike the previous day, three-pointers were falling for the Wildcats in the championship game as they went 6-13 for 46% from distance.  In comeback mode, the Wombats attempted 33 3-pointers, hitting on 8 of them.

Braxton Thomas led UW-WC’s scoring attack with 18 points including 3 3’s, and he added 7 rebounds. Adrian Huerta scored 15 and grabbed a season high 12 rebounds, quite a high number for a point guard. Huerta also had a team high 4 steals.  Koy Walsh scored 9 and hauled in 12 boards while dishing out a team leading 3 assists.  Trenton Walstra added 9 points including a pair of 3’s.  Ahmad Pender, Jr. and Derrick Chaney each scored 8.  AJ Barnes Jr. scored 5 and David Wiley, Jr. scored 4.  Tariq Frett closed out the scoring with 2.  For the game, UW-Washington County held a slim rebounding edge 45-41, and won the turnover battle as UW-Sheboygan had 23 turnovers compared to UW-Washington’s 14.